The World Made Straight

I was twelve years old when I first realized my family’s involvement in the Civil War was much more complex than I had imagined. This was 1965, the centennial of the war’s end, but the South was still winning in the creeks and woods where my friends and I re-created battles. We wore gray infantry caps ordered from the backs of comic books, Daisy air rifles our muskets. I’d just come home from yet another Southern victory when I found my great-uncle in our living room visiting my parents. We lived in Boiling Springs, North Carolina, a small town in the Appalachian foothills solidly Confederate during the Civil War, but both of my parents’ families had lived in the higher mountains since the 1700’s, my father’s side primarily in Buncombe and Madison counties, my mother’s in Watauga County. My great-uncle was from Madison, and when he saw the Confederate cap on my head he frowned. “Why are you wearing the hat of a bunch of traitors,” he grumbled.

As I grew older and learned more of my family’s history– particularly its history from 1861-1865—my great-uncle’s reaction became understandable. Perhaps because they were isolated enough to do so, my mother’s ancestors in Watauga appear to have largely stayed out of the Civil War, few actually enlisting in either army. Their sympathies, however, seem to have been more with the Union than the Confederacy. I say this because during World War Two some of my relatives had refused to reset their clocks to acknowledge daylight savings time, Roosevelt Time, as they disdainfully called it. They were unwilling to support any initiative put forth by a member of the political party that opposed Abraham Lincoln.

One of the most troubling aspects of history is how some of the worst atrocities have occurred among people who have coexisted for generations, as in Nazi Germany and more recently in Rhwanda and Bosnia. Such was the case in the county known as “Bloody Madison” during the Civil War. The worst atrocity, and there were many, occurred on a bitterly cold day in late January of 1863. The Confederate army sent a regiment into the Unionist hotbed of Shelton Laurel, even today one of the most isolated portions of Madison County. The Confederate soldiers, almost all from Madison County themselves, rounded up fifteen of their neighbors and took them prisoner. It was hardly a force of fighting men they captured. Many of the men were in their sixties, the youngest, David Shelton, was thirteen, his brother fifteen. The prisoners and all the members of the regiment, except their leader Colonel Keith, believed the men and boys were to be taken to a prison stockade in Tennessee. Inclement weather delayed the march several days (long enough that two of the prisoners escaped), but on the morning of January 18 the soldiers and their captives began their trek westward. They had marched only a few miles up the Knoxville Road when Colonial Keith ordered the prisoners to line up Soldiers drafted for the firing squad at first refused to shoot, until Keith threatened to kill them as well. The regiment was the North Carolina 64th.

For a number of years I believed that my ancestor Joshua Candler was among the executioners. It is disturbing to imagine him there. Here was a man who had taken an oath as a physician to heal, yet on this cold morning of January 23, 1863, he was, if not one of the actual shooters, a witness to this taking of life. What has haunted me even more is the possibility that before the war some of the prisoners were Dr. Candler’s patients. Had he perhaps once saved a man or boy whose life ended that morning in Shelton Laurel? If so, what had he felt as the prisoners lined up? If he was a member of the firing squad, had he deliberately missed? Or had he instead aimed carefully for a mercifully quick kill? Or had the war so inured him to violence and suffering he felt—either as witness or executioner—no compassion or horror at all?
I do not know and probably will never know. Older relatives and historical sources have given me more questions than answers. But I have known since my twenties that I would eventually write about what is today known as the Shelton Laurel Massacre. In the early 1990’s I published several poems about the massacre, but these were just warm-ups for the novel I had been carrying in my head for two decades. After a visit to Shelton Laurel in the spring of 2003, I finally began The World Made Straight, a novel that dealt not only with the massacre but its continuing importance over a century later to the participants’ descendants. In The World Made Straight, Doctor Candler makes two winter visits to Shelton Laurel. The first is to minister to eight-year-old David Shelton, who is near death due to scarlet fever. Five years later Dr. Candler will return to Shelton Laurel with the North Carolina 64th. The novel’s other story is set in the 1970’s and centers on two of the descendants of Joshua Candler and David Shelton, a down-and-out former schoolteacher and a seventeen-year-old high-school dropout.

In a recent conversation with an older relative, I found out that after the war Martin Rash’s son married Joshua Candler’s granddaughter. What Dr. Candler thought of his granddaughter marrying a “homemade yankee,” as such Union soldiers were called, is another question I have no answer for. In the 1890’s the Rash and Shelton families would also be intertwined by marriage. One other fascinating note about Martin Rash is that he did not join the Union army until after the Shelton Laurel massacre. My older relative believes his enlistment was a response to the killings.
The day after the massacre members of the Shelton family brought an ox to the meadow and filled the sled with their dead. They planned to haul them back to the Shelton family cemetery, but a snowstorm prevented them from getting there. Rather than risk the bodies being devoured by wild animals, they buried all thirteen in a single grave.
They still lie there now, almost one-hundred-and-forty-two years later. Over the grave is a single small stone marker, thirteen names etched into the granite. In the spring of 2002 I stood before this grave. It was a warm, cloudless day, but a stand of oak trees kept most of the sunlight from reaching the gravesite. It was so quite and still that it seemed the world had taken a long, deep breath and held it.

We live in an era that, much to its own peril, seems incapable of even acknowledging there is a past , much less that some resonance of that past might linger in a particular place, but I know that what I felt at that gravesite on that spring morning was a sense of being in a place where something of consequence was acknowledged, not just by the marker but also by the oak trees and the land and the very air itself. The World Made Straight is an attempt to render what I felt that morning into words. Perhaps I also believed that writing a novel, particularly one that addresses the possibility of past wrongs set straight, would dim a scene that has haunted me waking and sleeping for years. This scene, gleaned from first-person accounts, is of thirteen-year-old David Shelton’s last moments in that Madison County meadow.

I have finished my novel now, have put all that I know and feel about the Shelton Laurel Massacre in its pages. But the image of thirteen-year-old David Shelton standing in that snowy Madison County meadow remains: He is shot in both arms, his father and three brothers dead beside him. He tells the soldiers that he forgives them all for killing his father and three brothers, then pleads to be allowed to go home to his mother and sister. But the soldiers do their duty.

I am haunted still.
About the author

Ron Rash is the author of the prize-winning novels ONE FOOT IN EDEN and SAINTS AT THE RIVER, as well as three collections of poetry and two of short stories. He is the recipient of an O. Henry Prize, the James Still Award from the Fellowship of Southern Writers, and the Weatherford Award for Best Novel of 2004 (for SAINTS AT THE RIVER). Rash holds the John Parris Chair in Appalachian Studies at Western Carolina University and lives in Clemson, South Carolina. 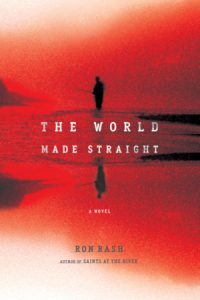