One Foot In Eden

A richly textured story of love and murder, ONE FOOT IN EDEN is the first novel from acclaimed poet and short-fiction writer Ron Rash. In beautifully crafted language, ONE FOOT IN EDEN unfolds through the distinctive voices of a small-town sheriff, a young married couple, and those who share in their secrets. Set in Appalachia, the story is also a tribute to a time, place, and a way of life slowly vanishing from the modern South. Rash is a native Appalachian and writes with deep understanding and affection for a region often misunderstood. The powerful balance of story and unforgettable characters make ONE FOOT IN EDEN a most promising debut novel.

“One Foot in Eden is a classic tale of passion and tragedy told by those most closely involved: the sheriff, the husband, the wife, the lover, the son. Each voice rings as true as the sound of an ax in the cold early morning air. I read this book straight through. I had to.”
— Lee Smith, author of Fair and Tender Ladies

“One Foot in Eden is a story of family secrets and family bonds, of legacies and intense loyalties, in prose that thrills like his poetry. I couldn’t put it down. He is one of our finest writers.”
— Robert Morgan, author of Gap Creek

“Ron Rash has written a hauntingly beautiful novel of a lost place and time, full of characters who have faced the truth of themselves.”
— Ashley Warlick, author of The Distance from the Heart of Things

“One Foot in Eden is a story of wild, almost primitive force and yet it is neatly and ingeniously put together. Ron Rash knows to the core the ways of those who yearn for what is just beyond their grasp. He has given us the strength of tragedy with the compassion of someone who cares deeply. Here is a lasting experience.”
— Fred Chappell,  North Carolina Poet Laureate 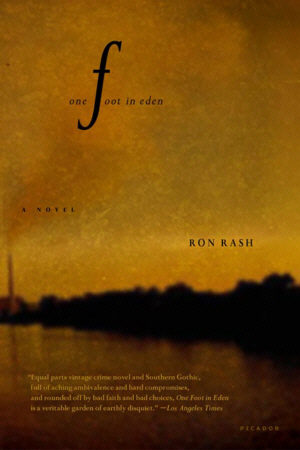