No items found
When Available...

THE COVE by Ron Rash

Laurel Shelton and her brother Hank are living out on farmland the locals say is cursed. And maybe it is. Laurel is born with a large birthmark that neighbors take as a sign of witchery. Hank loses an arm while serving overseas in WW I. When Hank falls in love with a woman who refuses to live there, Hank secretly plans to leave his sister behind.

But Laurel’s fate is forever altered when she comes upon a stranger in the woods one day, a stranger she saves from a near-fatal accident. With only a simple haversack of worldly belongings, including his treasured flute and note explaining that he is mute and bound for New York, the stranger slowly insinuates himself into life in the Cove, helping Hank on the farm, playing his ethereal music in the long twilit evenings, and, eventually, bringing Laurel the only real happiness she has ever known.

But where Laurel stumbles onto his real identity, she realizes the profound danger they are in, not only from an army recruiter determined to show his mettle by stoking fear and outrage over all things German (harassing an aging language professor at the nearby college, purging the library of any suspect foreign material), but also from her own brother, Hank, whose rage at the enemy who maimed him is barely contained beneath his placid surface.

In a page-turning climax, these characters lock horns with history and reveal Ron Rash once again to be a masterful novelist at the height of his powers.

When writers gather and tipple while discussing those not present at the table but admired, the name Ron Rash quickly comes up. He is a double-threat writer, great in both poetry and fiction. He uses language with such apparently effortless skill that it is as though he found words in his barn as a child and has been training them to fit his needs ever since. There’s not much he doesn’t know about humans in turmoil, or his region, a place where nothing ever changes until all of a sudden it does and often too much. Rash throws a big shadow now and it’s only going to get bigger and soon.
— Daniel Woodrell, author of Winter’s Bone

“Ron Rash is a writer of both the darkly beautiful and the sadly true; his new novel, The Cove, solidifies his reputation as one of our very finest novelists.”
— Richard Russo, Pulitzer Prize Winning author of Empire Falls

“I wish the whole world spoke the way Ron Rash’s characters do. Read him for his poetry and great humanity. Just read him.”
–Jennifer Haigh, author of Faith

“Warning: If you’re going to begin reading The Cove, be prepared to miss your appointment and cancel your dinner plans, because it’s one of those books that grabs you from the first page and won’t let go. Rash is a hypnotist, a magician, a conjurer, and that rarest of wordsmiths, a masterful storyteller.”
— Jonathan Evison, author of West of Here

“Set during World War One, The Cove is a novel that speaks intimately to today’s politics. Beautifully written, tough, raw, uncompromising, entirely new. Ron Rash is a writer’s writer who writes for others.”
— Colum McCann, author of Let the Great World Spin

“The Cove is a marvelous novel, bristling with power, humanity and the exceptional quality of characterization and story-telling we have come to expect from Ron Rash”
— Irvine Welsh, author of Trainspotting 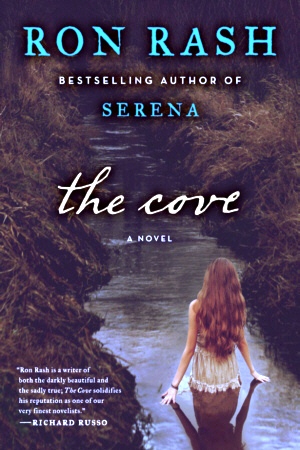