The year is 1929, and newlyweds George and Serena Pemberton arrive from Boston in the North Carolina mountains to create a timber empire. Although George has already lived in the camp long enough to father an illegitimate child, Serena is new to the mountains—but she soon shows herself the equal of any worker, overseeing crews, hunting rattlesnakes, even saving her husband’s life in the wilderness.

Together, this Lord and Lady Macbeth of the woodlands ruthlessly kill or vanquish all who fall out of favor. Yet when Serena learns that she will never bear a child, she vengefully sets out to kill the son George had without her. Mother and child begin a struggle for their lives, and when Serena suspects George is protecting his illegitimate family, the Pemberton’s intense, passionate marriage starts to unravel as the story moves toward its shocking reckoning.

Ron Rash’s new novel Serena catapults him to the front ranks of the best American novelists. This novel will make a wonderful movie, and the brave actress who plays Serena is a shoe-in for an Academy Award nomination.
— Pat Conroy

Rash is a storyteller of the highest rank and Serena confirms this from the opening sentence to the final page. An epic achievement.”
— Jeffrey Lent, author of In The Fall

“An Appalachian retelling of Macbeth, a thriller, a word-perfect evocation of an era and a people, a grim chapter in the history of conservation: if SERENA doesn’t finally win Ron Rash the overdue attention of the national literary (and cinematic) establishments, I can’t imagine what they’re holding out for.”
— Arthur Phillips, author of Prague, The Egyptologist, Angelica 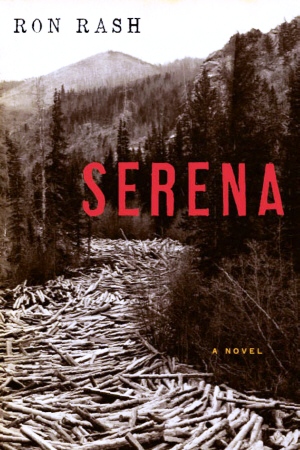