The Kansas City Star – October 3, 2015
[A] haunting backdrop of addiction and despair fuels the drama in Rash’s beautifully tragic story… Enhanced by Rash’s lyrical prose, this fascination with the land occasionally forces readers to pause and appreciate the beauty of Rash’s language like they would a flower or a sunset…the book’s poetic observations feel almost escapist, the mental gymnastics of a woman who desires a different reality.

The Philadelphia Inquirer – September 20, 2015
It was love at first page of Above the Waterfall, the new novel by this lyrical and evocative writer acclaimed for his novels, short stories, and poetry…You might call Rash our Appalachian Shakespeare… What roils below the surface is a haunting picture of the devastating effects of memory and guilt, and potent questions of loyalty and responsibility.

Star Tribune – September 19, 2015
Ron Rash is a rare and elegant writer whose evocative books are filled with astute observations of the world in which he lives…In “Above the Waterfall,” Rash has created another fine work: a quick-paced, slender novel that captures the imperfections of how we all are, our weaknesses, our biases, our prejudices, and then, in times of stress and anxiety, if and how we emerge from those troubles with our morals intact.

Charleston Post & Courier – September 13, 2015
Above the Waterfall is as rich and moving as [Rash’s] best. If you like detective novels, the plot twists are dizzying enough to keep you guessing…Fan or not, you’re going to find this one hard to put down.

The Clarion-Ledger – September 12, 2015
Rash is a master craftsman weaving this tale, as he has been in so many others, capturing the undertone of rural life today, its allure and tragedies. “Waterfall” will leave the reader pondering the imponderables of life — and grateful, as Rash portrays, in being witness to life’s beauties, even while surrounded by hardship.

The Atlanta Journal – September 3, 2015
Reading a Ron Rash short story can feel like diving off a cliff into a deep, dark lake. The cold of the water is shocking, disorienting — yet exhilarating. Such sensations linger long after the story ends.

Mountain Xpress – September 3, 2015
Above the Waterfall, with its quiet intensity and natural beauty juxtaposed against human ugliness, is the work of a writer who’s found his way with words.

The Charlotte Observer – September 3, 2015
Not midway through the novel, Rash creates a restrained and brilliantly-paced scene that alerted me that this novel, like his best-selling “Serena,” is headed for the big screen. It involves a meth bust, a strung-out young couple in a trailer, a microwave, a baby and a deputy who turns in his badge on the spot…The meth bust is one thing. It’s nasty and straightforward compared to the complicated trouble at the heart of the novel…I’m not used to reading Rash for the outer rather than the inner mystery. Reading “Above the Waterfall” is like walking a railroad track – the scenery along the way is great, and I’m enjoying the novel’s journey.

The Washington Post – September 2, 2015
Rash is an enormously gifted storyteller, who knows exactly how to keep the dramatic tension in his fiction as taut as a fly line with a lunker on the hook. Above the Waterfall — the title refers to the brook trouts’ pristine habitat — moves seamlessly from present to past and back to the present again as Rash reveals his characters and the mountain fastness that has shaped them…Best of all, he knows the hearts of his people. He’s one of the few writers at work today with the insight, the talent and the vision to show us how sometimes, for all our sorry shortcomings, we’re able to achieve a certain redemption through our capacity for kindness and decency.

Esquire – August 1, 2015
“Ron Rash is the kind of writer you want to call a Pulitzer-prize winner because it’s a foregone conclusion. His poems and short stories and novels—Serena, my favorite among them—have established him as the bard of Appalachia, but make no mistake: He’s a national treasure, albeit one who’s still too unknown. His new book, Above the Waterfall, is a lushly written page-turner…”

Booklist Starred Review – August 1, 2015
Les, a sheriff in a small Appalachian town, is only 51, yet he’s ready to retire as meth labs poison his neighbors and beloved countryside. With just a few weeks left before his departure, Les, a law officer not entirely on the up-and-up, finds himself confronted by two volatile cases with deep personal connections. The investigations involve thorny conflicts over land and livelihood as a fancy resort abundantly stocks a stream so that tourists can fish, while impoverished locals face No Trespassing signs and surveillance cameras. A loner ever since his early marriage failed, Les isn’t sure how to characterize his relationship with Becky, a profoundly haunted survivor of a childhood school shooting who became a park ranger enthralled by nature. The word that comes to Les’ mind is accomplices. Rash (Something Rich and Strange , 2014), a best-selling writer honored for his transporting storytelling and his lyricism, channels his love of poetry through Becky, who always carries a notebook and is steeped in the ravishing poems of Gerard
Manley Hopkins, the inspiration for the novel’s enrapturing rhythms and glinting descriptions. Combining suspense with acute observations and flashing insights, Rash tells a seductive and disquieting tale about our intrinsic attachment to and disastrous abuse of the land and our betrayal of our best selves. — Donna Seaman

Publishers Weekly – July 10, 2015
“Rash’s (Nothing Gold Can Stay) widely celebrated style lends his Southern Gothic–tinged books a suppleness that verges on prose poetry and, in the case of his new novel, elevates a small-town noir story… But there’s no denying Rash’s grasp of the North Carolina landscape and its reflection in the oft-tortured souls of its denizens, making this novel one of his most successful ventures into poetic humanism.” 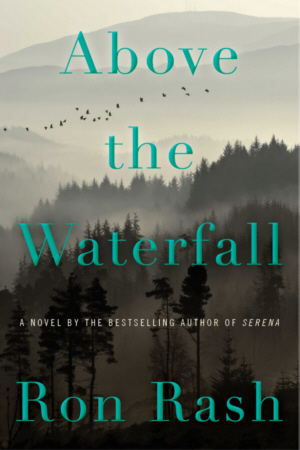