The following author biography and list of questions about Saints at the River are intended as resources to aid individual readers and book groups who would like to learn more about the author and this novel. We hope that this guide will provide you a starting place for discussion and suggest a variety of perspectives from which you might approach Saints at the River.

When a twelve-year-old girl drowns in the Tamassee River and her body is trapped in a deep eddy, the people of the small South Carolina town that bears the river’s name are thrown into the national spotlight. The girl’s parents want to attempt a rescue of the body; environmentalists are convinced the rescue operation will cause permanent damage to the river and set a dangerous precedent. Torn between the two sides is Maggie Glenn, a twenty-eight-year-old newspaper photographer who grew up in the town and has been sent to document the incident. Since leaving home almost ten years ago, Maggie has done her best to avoid her father, but now, as the town’s conflict opens old wounds, she finds herself revisiting the past she’s fought so hard to leave behind.

“A compelling novel…Rash tells his story with subtlety and the best kind of empathy.”
— The Wall Street Journal

“Rash’s clean prose and love for the land easily carry this book to its conclusion, providing readers with a powerful ending that is both surprising and well earned.”
— The Charlotte Observer

“If traditional, straightforward storytelling with fleshy characters and detail is your thing, allow Ron Rash to sweep you deep into the South Carolina wild.”
— Greensboro News & Record

“Rash beautifully captures the resulting emotions, which surge as powerfully as the river that wrought them.”
— Southern Living

“Rich with nuance…Rash clearly knows the people and places he writes about, and that authenticity pays off in a conclusion that packs an unexpected and powerful punch.”
— Publishers Weekly

“From the first page to the last, the author’s down-to-earth characters and rich descriptions of the backwoods carry readers through this emotionally charged story.”
— Library Journal (starred review)

“Appalachian dialects and Rash’s lyrical description of this small Appalachian town create a strong sense of place, adding to his well-spoken plea against devastation caused by damning the nation’s rivers.”
— Booklist

1. Is the narrative voice convincingly female? If so, what details make Maggie come alive? If not, what seems missing or mistaken?

2. Is Saints at the River a novel about suffering and loss?

3. What is at stake for each of the main characters in this novel? How do their individual losses connect or divide them? Do these losses motivate their actions and reactions?

4. How do you think the river functions in the story? Is it a metaphor? Is it a catalyst? Does it really take on a life of its own as Luke and his followers seem to believe? Would you consider it a character?

5. Could this story take place in any other part of the world? Could it unfold without the river?

6. Maggie tries to remain neutral during the first two-thirds of the novel, but finds herself regretting that position later. What do you think causes this change?

7. What similarities exist between the Kowalskys and Luke?

8. How does love manifest itself throughout the novel? To what extent (if at all) is it tied into forgiveness?

9. In the second half of the book, Maggie, to her consternation, begins to remember good moments with her father. What is the role of memory in the novel? Does Maggie’s changing memory make her any less reliable a narrator?

Ron Rash is the author of the prize-winning novel One Foot in Eden, as well as three collections of poetry and three of short stories. He is the recipient of an O. Henry Prize, the James Still Award from the Fellowship of Southern Writers, and the 2005 Southeast Booksellers Association (SEBA) Fiction Award and 2004 Weatherford Award for best novel (both for Saints at the River). Rash holds the John Parris Chair in Appalachian Studies at Western Carolina University and lives in Clemson, South Carolina. 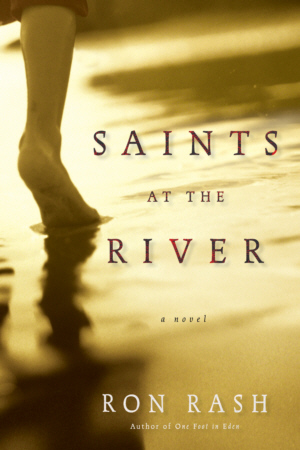