The story of The Thieves of Manhattan was born in the back of a limousine, bound for a party to which I had not been invited. I was in LA, and I was seated between two other authors. In the limo, the three of us joked about whom we would pretend to be when we arrived at the party so that we could get past the bouncer.

I was joking, but when I found myself at the party talking to a memoirist, whose most-recent, bestselling nonfiction book sounded to me like a preposterous fraud, I had a disturbing realization: Each of us was, in some fashion, a con artist, striving to maintain relevance in an increasingly-marginalized industry, pursuing writing careers in a country that read less and less. When I got back to the West L.A. apartment where I was staying, I had an idea for a story—a caper about a fake memoir, set in the twilight of the beleaguered world of publishing, a story in which the most outlandish tales would turn out to be true, while just about everything that was taken for granted turned out to be a lie.

Like just about everyone else in the book world, during these past few years, I’ve spent a lot of time captivated by the myriad stories of literary hoaxes, of plagiarism allegations, of fake or embellished memoirs. I’ve even become a student of this sort of fiction. Or nonfiction. Or whatever you call that category that exists on the border between what actually happened and what was made up. I’ve read James Frey’s exaggerated tales of drug abuse and criminality; I’ve read the razor-sharp short stories of the teenaged JT Leroy, who was really the brainchild of the forty-something Laura Albert. I’ve read about the exploits of Clifford Irving, who scammed the publishing industry when he invented from scratch the autobiography of reclusive billionaire, Howard Hughes. I’ve read the ridiculous Stephen Glass articles that haven’t been expunged from the Internet. I’ve read Forbidden Love by Norma Khouri and found myself drawn in by her tales of Jordanian honor killings, and I’ve listened with something approaching admiration to Margaret Jones, the prep school grad who convincingly adopted the voice of a South Central LA gangbanger for her now-discredited book Love and Consequences.

And, when I was preparing to write The Thieves Of Manhattan, I read the older, now-forgotten exemplars of the genre—the lurid tales of a libidinous suburban housewife in Naked Came The Stranger; The Diary of A Young Lady Of Fashion, purportedly a journal from 18th Century France but really written by a 20th Century British teenager. I became hypnotized by the nonsensical poems of the fictional poet Ern Malley, compiled in The Darkening Ecliptic, which became part of what was arguably the greatest literary scandal in the history of Australia.

Though part of me has felt a certain outrage at some of the more blatant literary frauds, I have also experienced a grudging admiration and some sympathy. For, I too have felt the temptation. I’ve felt it when interviewers have complimented me on how realistic a sequence in one of my books seems to be, then asked, “Did this actually happen?” I always feel I’m letting someone down when I say, “No, I just made it up.” I have felt the temptation on tough research assignments, when answers have seemed so elusive; how easy it would be to invent some incident, quote some imaginary source. And I have felt the temptation when editors have read drafts of my articles, then asked, “Is that all that happened?” “Wasn’t there anything more?” And what I have often felt tempted to do is to say, “Wait a minute. There is more. Much more.” After which, I want to spin a tale, one that’s far more remarkable and dramatic than the true tale I’ve told. But I’ve never done that. Too many scruples, perhaps. Or maybe just too little courage.

I started writing The Thieves of Manhattan shortly after completing a memoir, one in which I felt bound dutifully to the truth. In Thieves, I felt no such obligation. I wanted to tell the most outlandish story possible, to people it with outrageous characters, insane plot twists, chase scenes, double-crosses, scams within scams within scams, to create the perfect literary crime. That was the fun and easy part; the hard part was trying to make everything seem true. A difficult task, even in publishing, an industry that always seems ripe for a good con.

Along my path, I have won new admiration for some of the cleverest practitioners of literary fraud. I’ve even befriended two of them, who took what could have been a simple lie and raised it to an art form all its own, and am strangely proud to say that Laura Albert (aka JT Leroy) and Clifford Irving (aka Howard Hughes) have both graciously endorsed The Thieves of Manhattan. On a spiritual level, I feel that my novel has granted me honorary entrance into their exclusive society.
So, next time I’m invited to a swanky Hollywood party and I feel I have to make up a story about who I am, I think I’ll say I’m a liar—that’s probably one of the truest things a novelist can say about himself. Oh, and as for that writer I mentioned, the one who I met out in LA, he’s still out there, writing books that he says are nonfiction. And just about everybody still believes him. 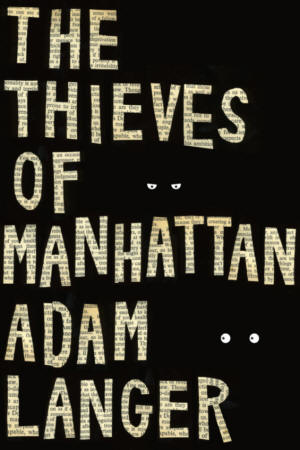