To his friends, Seymour Langer was one of the brightest kids to emerge from Chicago’s Depression-era Jewish West Side. To his family, he was a driven and dedicated physician, a devoted father and husband. But to his youngest son, Langer was also an enigma: a somewhat distant figure to whom he could never quite measure up; a worldly man who never left the city of Chicago during the last third of his life; a would-be author who spoke for years of writing a history of the Bonus March of 1932, when 20,000 World War I veterans descended on the nation’s capitol to demand compensation.

Using this dramatic but overlooked event in U.S. history as a way into understanding a father-son relationship, Adam Langer sets out to uncover why the Bonus March intrigued his father, whose own personal history always seemed to be artfully obscured by a mix of evasiveness and exaggeration.

Langer interweaves the history of the Bonus March and interviews with such individuals as Bonus March aficionado Senator John Kerry, and the influential writer and critic Norman Podhoretz, with his own reminiscences and those of his father’s relatives, colleagues, and contemporaries. In the process, he explores the nature of memory while creating a moving, multi-layered portrait of both his father and his father’s generation.

“At last–a memoir that understands the deepest mission of first person narrator which is to be a steward of history. Adam Langer’s magnificent documentary work in MY FATHER’S BONUS MARCH is a meticulous reconstruction, part detective story, part elegy, and altogether alluring in its fine attention and relentless search into the Depression and out again. This remarkable book comes to us just when we need it and has an uncanny and haunting resonance for our times.”
— Patricia Hampl, author of The Florist’s Daughter and Blue Arabesque

“MY FATHER’S BONUS MARCH is a brilliant and beautiful work of memory, a hymn to boyhood, a hymn to Chicago, that somber city, driven by the need that drives all those rare books that you know, on first encountering, you will re-read and cherish–the need to get back what has been lost.”
— Rich Cohen, author of Sweet and Low, Tough Jews, and Israel Is Real.

“MY FATHER’S BONUS MARCH is a fascinating and touching book, part personal memoir, part history. Its examination of the Bonus March of 1932 through the eyes of father and son is an extraordinary exhibition of the personal meanings of history.”
— Scott Turow, author of Presumed Innocent

“Chicago’s own bard, Studs Terkel, would be proud, maybe even envious, of Adam Langer’s terrific tale. He weaves American history, his father’s Depression era coming of age, and his own experience growing up in the ’70s and ’80s into a narrative quilt so artful it covers a reader’s sensibility with warmth and beauty. This is truly a multigenerational treat…”
— Peter Davis, Academy-Award winning directory of Hearts and Minds 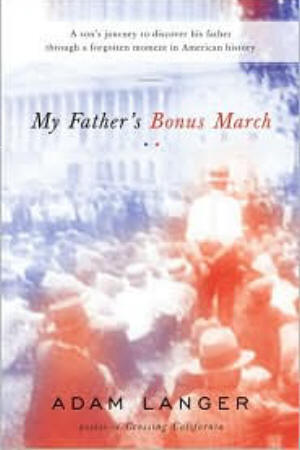