An enthralling literary mystery that connects some of the world’s most famous authors—from Norman Mailer and Truman Capote to B. Traven and J. D. Salinger—to a sinister collector in Chicago

Adam Langer, the narrator of this deft and wide-ranging novel by the author of the same name, tells the intertwining tales of two writers navigating a plot neither one of them could have ever imagined. There may be no other escape than to write their way out of it.

Adam is a writer and stay-at-home dad in Bloomington, Indiana, drawn into an uneasy friendship with the charismatic and bestselling thriller author Conner Joyce. Conner is having trouble writing his next book, and when a menacing stranger approaches him with an odd—and lucrative—proposal, events quickly begin to spiral out of control.

A novel of literary crimes and misdemeanors, The Salinger Contract will delight anyone who loves a fast-paced story told with humor, wit, and intrigue.

“Whom do we really write for and why? Langer’s mad-genius look at creativity, publishing, and the difference between what we do for love and what we’re forced to do for money, plumbs the dark side of inspiration with funhouse aplomb. Dizzyingly brilliant, with prose as clear as a rushing stream.” —Caroline Leavitt, New York Times bestselling author of Pictures of You and Is This Tomorrow

“‘Revelatory. Keeps all its secrets to the end, which is a whopper.’ . . . Wait. That’s a blurb for a novel within Adam Langer’s novel. But it applies just as well to The Salinger Contract, Langer’s latest nervy excursion on the boundary between fiction, non-fiction, and literary gamesmanship. A lot of fun, up to and including that whopper . . .” —Ben Yagoda, author of How to Not Write Bad: The Most Common Writing Problems and the Best Ways to Avoid Them and Memoir: A History

“In The Salinger Contract, Adam Langer serves as chief anthropologist, guiding us deftly through the tribal customs of the literary world—its longings, follies, disappointments, and secret obsessions. Like nesting boxes, this novel is neat with puzzles and intrigue. I couldn’t put it down—a cliché I can’t resist!” —Patricia Henley, National Book Award–nominated author of Other Heartbreaks and In the River Sweet

“The Salinger Contract is at once a mercilessly readable thriller, and a sly commentary on the state of the artist in the modern world. Langer undermines the reader’s expectation at every twist and turn, proving, as only the best thrillers do, that nothing is what it seems.” —Jonathan Evison, author of West of Here and The Revised Fundamentals of Caregiving 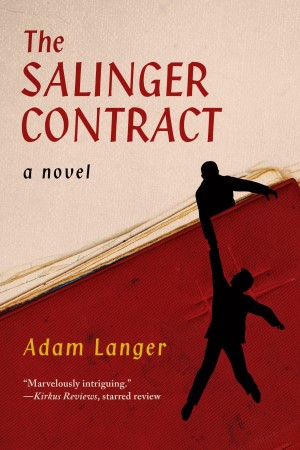