Book number 1 in THE OUTLIERS trilogy.

It’s been a while since Wylie and Cassie have been best friends. But when Wylie gets a cryptic text from Cassie asking for help, she sets off with Jasper (Cassie’s questionable boyfriend) to save her ex-best friend from herself. But as Cassie’s sketchy directions lead Wylie and Jasper farther from home, Wylie worries they are rushing headlong into something much more dangerous. Then again, Wylie has spent a lifetime controlling her overactive imagination, but it’s much worse since her mom was killed in a car accident and her scientist father retreated into his research, leaving her to grieve on her own. When things on the road go from bad to worse, Wylie and Jasper realize that they are already in too deep. And that the real danger is much different—and more frightening—than they ever could have imagined. A gripping tale of fierce loyalty and misplaced trust, The Outliers chronicles a journey that will forever change Jasper, Cassie and Wylie. One that might just change the world.

“McCreight’s book is an edge of the seat page turner. Her ability to get at the core of what it means to be a friend, a girl, a human being in this society is at once thoughtful and dead on.”
—Jacqueline Woodson, National Book Award winning author of Brown Girl Dreaming

“An exhilarating novel that unfolds at warp speed, Kimberly McCreight’s The Outliers tracks two teenagers into the remote and unpredictable woods of Maine as they risk everything to find their missing friend. With shocking discoveries at every bend and shifty characters who change on a dime, The Outliers was unputdownable, its final words leaving me with chills and an insatiable need for more.”
—Mary Kubica, New York Times bestselling author of The Good Girl and Pretty Baby

“A spellbinding thriller that keeps you guessing until the very last page, The Outliers is all about trust, truth, and when to go with your gut. Get ready to fall in love with Wylie and her unique talents.”
—Sara Shepard, bestselling author of Pretty Little Liars and The Heiresses

“The Outliers is a fast-paced, emotional, and darkly compelling novel with an ending that works like a catapult. I can’t wait to find out what McCreight has hidden up her sleeves!”
—Julianna Baggott, bestselling author of Harriet Wolf’s Seventh Book of Wonder and the Pure trilogy.

“Original and wholly addictive . . .a heart-pounding mystery that will leave readers desperate for the next book.”
—Suzanne Young, bestselling author of The Program 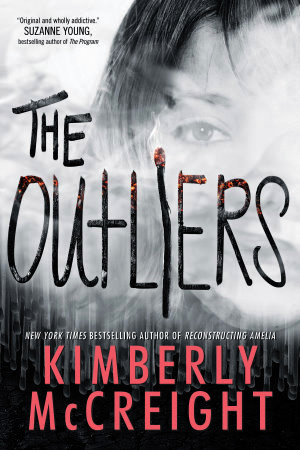