When Kate, single mother and law firm partner, gets an urgent phone call from her daughter’s exclusive private school summoning her to, she’s shocked. Amelia has been suspended for cheating. It’s completely out of character for her over-achieving, well-behaved daughter to do something like this.

Frantic, Kate finally arrives at Grace Hall, but what she finds is beyond comprehension.
Her daughter Amelia is dead.

Despondent over having been caught cheating, Amelia has jumped from the school’s roof in an act of impulsive suicide. At least that’s the story Grace Hall and the police tell Kate. In a state of shock and shattered by grief, Kate tries to come to grips with this life-shattering news. Then she gets an anonymous text:

The moment she sees that message, Kate knows in her heart it’s true. Clearly Amelia had secrets, and a life Kate knew nothing about. Wracked by guilt, Kate is determined to find out what those secrets were and who could have hated her daughter enough to kill. She searches through Amelia’s emails, texts, and Facebook updates, piecing together the last troubled days of her daughter’s life.

Reconstructing Amelia a stunning debut page-turner that brilliantly explores the secret world of teenagers, their clandestine first loves, hidden friendships, and the dangerous cruelty that can spill over into acts of terrible betrayal.

“In this heart-wrenching story of secrets and betrayal, Amelia’s mother, Kate, is taken places no parent should ever have to go as she tries to piece together the truth about her daughter’s tragic death. McCreight captures the complexities, cruelty and angst of teenage girls so well my stomach was in knots. What really happened to Amelia? You’ll find yourself staying up all night to find out.
— Jennifer McMahon, author of The One I left Behind

“Kimberly McCreight has crafted a heartrending and intricate novel that explores the turmoil of adolescence. Reconstructing Amelia is so riveting that I read it in one sitting.”
— Masha Hamilton, author of 31 Hours and The Camel Bookmobile

Kimberly McCreight has written a gripping mystery that moves as swift as a luge ride under its heavy topical weight. Tackling the thorny issue of school bullying head-on, Reconstructing Amelia entertains even as it explores the hardest kind of death to accept — the death of a child.
— Emily Raboteau, author of The Professor’s Daughter and Searching for Zion

“Reconstructing Amelia is a brilliantly plotted and beautifully written literary suspense, as enthralling as it is moving. With remarkable insight and sensitivity, McCreight explores the complexities of what it means to be both a mother and a daughter in this confusing, often terrifying age of social media and, in the process, tells a riveting, unforgettable story.”
— Andrew Porter “Flannery O’Connor Award-winning author of The Theory of Light and Matter 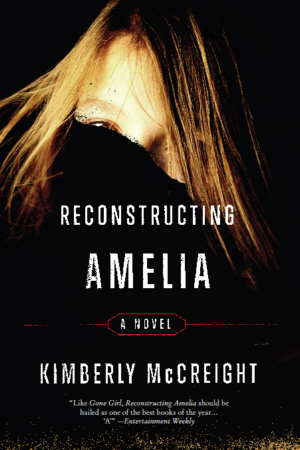