In the vein of The Red Tent and A Thousand Splendid Suns comes a novel of a young woman in early 20th-century Jerusalem who must choose between her faith and her passion.

Esther Kaminski knows that her duty is to marry young and have many sons while awaiting the return of the Messiah: that is what all young Haredi women do. But when her French teacher catches her doodling in a notebook one afternoon, and begins to give her art lessons, Esther wonders if God might have a special destiny for her: maybe she is meant to be an artist, not a mother; maybe she is meant to travel to Paris, not stay in Jerusalem. When disaster strikes her family, however, Esther changes her mind. She pushes aside her yearning for painting and devotes herself instead to serving God’s will.

As the years pass, Esther finds both comfort and repression in God’s decrees, enjoying the rituals of faith while trying not to think about the desires she denies herself. And then one day an opportunity will arise that will change everything she knows, that will force her to confront once and for all the questions she has avoided her entire life: what is faith? what is destiny? And to whom must she be more true—her God or herself?

“Exquisitely told, with details so vivid you can almost taste the food and hear the voices, JERUSALEM MAIDEN is a coming-of-age story set in a time and place that few of us know. Talia Carner has written a moving and utterly captivating novel that I will thinking about for a long, long time.”
— Tess Gerritsen, New York Times bestselling author of The Silent Girl

As bold and fragile as its main character, JERUSALEM MAIDEN is at heart a story of revolution. Esther Kaminsky risks everything to ask questions about womanhood and faith that even in the asking constitute sin for an obedient girl. In Esther’s time, risking ‘everything’ was literal. Talia Carner’s story captivates at every level, heart and mind.”
— Jacquelyn Mitchard, author of The Deep End of the Ocean and Second Nature

“Talia Carner’s JERUSALEM MAIDEN is an exquisitely explosive journey back to the final days of the Ottoman Empire in Jerusalem. She creates a portrait of a brilliant young artist trapped in the body and soul of an Orthodox Jewish girl. Carner’s descriptions of life in Palestine and Paris convey the bleakness of thwarted ambition, the narrow mindset of fundamentalism, and the struggle between self-fulfillment and community expectation. It immerses us in a provocative and astonishingly realized world filled with evil spirits, arranged marriages, prayer, poverty, and the pain of breaking free.”
— Michelle Cameron, author of The Fruit of Her Hands

“JERUSALEM MAIDEN is a novel but the reader feels that she has entered living, lost history. Once engaged, you cannot put this book down. Suddenly, you are in Jerusalem, Jaffa, and Paris in the years spanning 1911-1924. The details are so real, in terms of crowded living conditions, the harshness of Jewish life under the Ottoman Empire, the rising tide of Zionist politics–but the book also tells us how people dressed, what they ate, and about Sabbath joys and Torah discussions… Carner renders these issues heartbreakingly real.”
— Phyllis Chesler

“Talia Carter is a skillful and heartfelt storyteller who takes the reader on journey of the senses, into a world long forgotten. Her story of a woman who struggles and seeks the light is universal and inspiring. Read this book and savor.”
— Jennifer Lauck, author of the New York Times bestseller Blackbird and the newly released Found: A Memoir

“Esther Kaminsky is a true heroine — talented, passionate, opinionated — and I wanted her to succeed on every page of this novel. But for me the truly marvellous thing about JERUSALEM MAIDEN is how deeply Talia Carner is able to evoke Esther’s faith and the complexity of the choices she faces. A beautiful and timely novel.”
— Margot Livesey 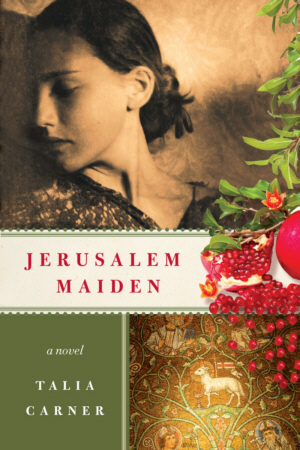