A thought-provoking novel that tells the riveting story of a daughter of Holocaust survivors who travels to Russia on business shortly after the fall of communism and finds herself embroiled in a perilous mafia conspiracy that could irrevocably destroy her life.

Brooke Fielding, a thirty-eight year old New York investment manager and daughter of Jewish Holocaust survivors, finds her life suddenly upended in late September 1993 when her job is in jeopardy. Brooke accepts an invitation to join a friend on a mission to Moscow to teach entrepreneurial skills to Russian business women, which will also give her a chance to gain expertise in the new, vast emerging market. Though excited by the chance to save her job and be one of the first Americans to visit Russia after the fall of communism, she also wonders what awaits her in the country that persecuted her mother just a generation ago.

Inspired by the women she meets, Brooke becomes committed to helping them investigate the business crime that threatens their businesses. But as the uprising of the Russian parliament against President Boris Yeltsin turns Moscow into a volatile war zone, Brooke will find that her involvement comes at a high cost. For in a city where “capitalism” is still a dirty word, where neighbors spy on neighbors, and the new economy is in the hands of a few dangerous men, nothing Brooke does goes unnoticed—and a mistake in her past may now compromise her future.

A moving, poignant, and rich novel, HOTEL MOSCOW is an eye-opening portrait of post-communist Russia and a profound exploration of faith, friendship, and heritage.

“Talia Carner has a sharp eye for detail and a captivating storytelling eloquence.
Hotel Moscow is a finely-drawn tale of a country emerging from its dark Soviet past into a present overshadowed by a new kind of terror and lawless corruption. Told from the point of view of an American woman, Brooke Fielding, who is in Moscow on business, this is a frightening journey into a world of violence and power struggles that will keep the reader mesmerized.
A wonderful evocation of time and place and an insightful post-Cold War thriller which reminds us that in Russia the more that changes, the more that stays the same.”
— Nelson DeMille, bestselling author of The Charm School, The Gold Coast, The General’s Daughter (and dozens others.)

“With the urgency of a thriller and the sharp, atmospheric lens of a great documentary, HOTEL MOSCOW hurls you into the vortex of the corrupt, outlaw world of the Soviet Union morphing into modern Russia. A fascinating and ultimately, gripping read!”
—Andrew Gross, New York Times bestselling author of One Mile Under (and a dozen others, including James Patterson’s.)

“Talia Carner sweeps us away along with her brave and determined heroine to an exotic and complex time and place, and keeps us riveted with the tension and dangers of international intrigue. A real page-turner!”
— Tami Hoag, New York Times bestselling author of Cold Cold Heart (and dozens others.)

“Hotel Moscow is bold and breathless. A smart story about a fearless New York woman who arrives in Russia with more baggage than she knows, it explores both the personal and the political with compelling prose, heartfelt insights and gripping action. An impressive achievement!”
— Ellen Meister, author of Farewell, Dorothy Parker

“Talia Carner is a born storyteller, and in her new novel, Hotel Moscow, her unique gifts are in abundance. She has written a compelling tale of life during the fall of the Soviet Union—engaging, exciting, and revelatory of what it was like for a woman to be there in a time of great danger, and great change. This is a stunning and very shrewd book that will linger vividly in the memory of every reader.”
— Jay Neugeboren, award-winning author of Imagining Robert, 1940, The Stolen Jew

“Hotel Moscow is a tantalizing book full of corruption, extortion and the shocking treatment of women—and that is just the tip of the Russian iceberg. Talia Carner’s engaging style draws you in with its powerful description of life in Russia twenty months after the fall of communism. I was mesmerized from beginning to end.”
— Deborah Rodriguez, author The Kabul Beauty School

“…Overcoming decades of rigid thinking, and navigating in a dark underworld controlled by a brutal mafia and a male-dominated, politically corrupt bureaucracy, makes [the protagonist’s] task a lot more challenging and dangerous than anticipated, at the same time it makes for a gripping read. Rich with insight and detail, as well as drama and emotion, through its multiple-character narrative this book deftly explores a chapter in history that is little understood much less written about, while telling a heartening story about the possibilities for change and empowerment that follow when brave women work creatively together to forge a better future.”
— Rodney Barker, author of Dancing with the Devil: Sex, Espionage and the U.S. Marines

“A heroine both glamorous and smart, hard-driving and compassionate, Brooke Fielding — American investment counselor and daughter of Holocaust survivors – travels through the looking glass of Russia, 1993, when the country was lurching toward capitalism, women were coming into their own, and danger lurked around every corner. In Talia Carner’s sweeping and suspenseful Hotel Moscow, Brooke takes us lucky readers on a perilous journey with her not only to a fascinating place and era, but also into the secrets of her own soul.”
— Roy Hoffman, author of Chicken Dreaming Corn and Come Landfall 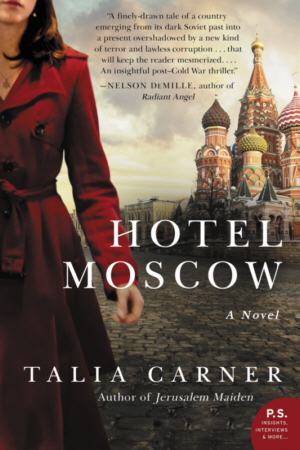