Huffington Post – June 6, 2011
“Even though I could relate to Esther Kaminsky’s yearnings and spiritual questions, Jerusalem Maiden pulled me into unfamiliar territory, into the world of Jerusalem’s Orthodox Jews…Carner explored what it was like to be a young girl in Jerusalem in the early 1900s. What she ended up with is a story that shows how these rigid beliefs often make a mockery out of the need to express oneself…However, instead of preaching, Carner shows the hypocrisy through how a young woman’s desire to please her God didn’t agree with her yearning to express her handiwork on canvas. My heart ached for Esther as I watched her go through life suppressing her dream in order to do what she was told by the men who studied and interpreted the Torah, since she, a woman, was forbidden to do so. Brava to Talia Carner…for writing such a provocative novel, one that is bound to stir much discussion.”
–Carol Hoening

Jewish Women International Magazine – June 1, 2011
Talia Carner’s novel, Jerusalem Maiden is set in the heavenly and earthly city, in the early years of the 20th century. Esther Kaminsky is a talented young woman, born into a poor ultra-orthodox family in Mea Shearim. For Esther, the openness of Paris, which she has secretly read about, seems preferable to the regulated life she faces in Jerusalem. Carner, formerly the editor of Savvy Woman magazine, has a sharp eye for historical detail, as she portrays Esther’s struggles with questions of faith, destiny, ritual, spiritual life and freedom.
–Sandee Brawarsky

Life in Review
“A beautiful story that will take you away to another time and place. It’s a story that will touch you and will stay with you long after you’ve finished the book… I very highly recommend this book… I was extremely impressed with Ms. Carner’s writing and I will definitely be looking for more of her books.”

Unabridged Chick
“This was a beautiful, moving novel. Carner’s writing and brilliantly conceived characters plunged me into the story… Esther might be one of the most moving and compelling heroines I’ve read in a long time… Gripping.”

Books Like Breathing
“An amazing coming of age story… The writing was vivid and engaging.”

Book Journey
“Passionate… Talia Carner had me from the first pages of this well written, well thought out book… Deliciously detailed descriptions of life… A page turner for sure… This is a wonderful read.”

Rundpinne
“Wow!… Spectacular… Carner creates an exceptional protagonist in Esther and through extremely vivid descriptions, the reader will easily be transported to another time.” 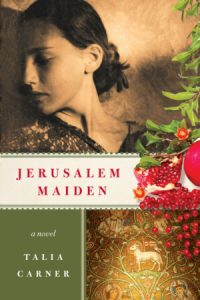