Minneapolis Star Tribune – March 9, 2003
“History might be the subject matter of [Alexander’s] latest fiction, but he crafts it with the excruciating build of dread suitable to a horror story… Alexander has crafted the story with such suspense that one reads this book in a state of suspended disbelief, hoping that the awful, bloody ending will unfold in a new light… The writer throws into question all our perceptions of the story thus far, and reminds us of the infinite variables that any truth contains… The drama… comes in a remarkable, highly speculative ending that lingers long after the book is finished.”
— Kira Obolensky

Atlantis Magazine – February 1, 2003
“Romanov fiction is a difficult genre to write… Yet The Kitchen Boy manages to escape this fate, largely because the author captures so neatly the Russianness of the tragedy and the fascinating enigma of the ‘Russian soul.’ The Kitchen Boy is a beautiful and lyrical tale of high adventure in the time of the Revolution. It comes highly recommended for those who can set historical differences aside and simply lose themselves in the wonderful prose of this modern Russian fairy-tale.”

Library Journal – January 2003
“Alexander transforms a now-familiar and bloody era of history – the Bolshevik Revolution and the Romanov massacre – into a suspenseful and richly layered account of a family in deadly peril… Tsar Nicholas and his wife, Alexandra, are portrayed as loving but achingly flawed people whose poor judgments lead inexorably to the familys destruction… Alexander’s version of what might have befallen them packs a wallop that is surprising but consistent with his story. Sure to entrance readers in most public libraries, this is recommended for historical fiction collections.”
–Barbara Conaty

BookPage – January 2003
“[An] intriguing work of speculative historical fiction… The novel successfully maintains an intense atmosphere of peril and suspense despite the reader’s foreknowledge of the Romanovs’ fate. The calamity is heightened by the fierce, almost primal protectiveness the parents showed toward their children… The Kitchen Boy is a fascinating and suspenseful glimpse of a tempestuous but shadowy period in Russian history. It’s also a moving portrait of a family that, despite their legendary role in world events, proved in the end to be as mortal as the rest of us.”
— Gregory Harris 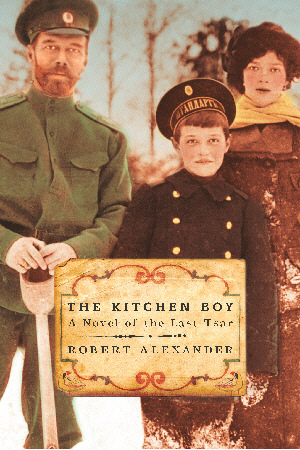