The Washington Post – February 16, 2006
“For readers who like their juicy scandals topped with a hearty dollop of history, Alexander serves up a satisfying portrait of a court in its last throes of decadence and intrigue.”

Booklist – November 2, 2005
“In The Kitchen Boy, Alexander creatively imagined an answer to the mystery of the last days of the Russian imperial family during the revolution… Now he ventures into the never-cleared-up last days of Gregory Rasputin… Employing the fast pace of a thriller and the ability to make a remote historical episode personal to the reader, Alexander views events from the perspective of Rasputin’s elder daughter, Maria… The author lends great understanding to the time and to actual historical figures.”
— Brad Hooper

Publishers Weekly – October 31, 2005
“In an endeavor similar to his debut novel, The Kitchen Boy, Alexander couples extensive research and poetic license, this time turning his enthusiasm toward perhaps the most intriguing player in the collapse of the Russian dynasty: Rasputin. This eyebrow-raising account of the final week of the notorious mystic’s life is set in Petrograd in December 1916 and narrated by Rasputin’s fiery teenage daughter, Maria… The combination of Alexander’s research and his rich characterizations produces an engaging historical fiction that offers a Rasputin who is neither beast nor saint, but merely, compellingly human.” 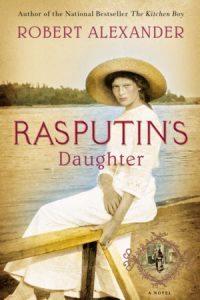