The Gift Of Valor

Military Officer Magazine – January 2006
“The most dramatic and emotional book yet written about the war in Iraq… The Gift of Valor tells the stunning story of one Marine infantry squad leader’s heroism and tragic death and the impact both events had on his family and his men… Phillips’ narrative is graphic and gruesome, sensitive and powerful, telling of combat leadership and courage and the desperate eight-day fight by Army and Navy medical personnel vainly trying to save Dunham’s life. Both sad and inspiring, this is a superb tribute to America’s armed forces.”
— William D. Bushnell

Los Angeles Times – September 24, 2005
“A minor masterpiece of precise and detailed reporting… Close-up and vivid… In lesser hands, the story of Cpl. Dunham probably would have been used as a parable of either support or, more likely, opposition to U.S. policy in Iraq. But Phillips is too good a reporter to impose politics on the story — a story that has its own integrity and heroism separate from any wisdom or folly coming from Washington.”
— Tony Perry

Newsday – August 28, 2005
“Phillips concentrates his abundant energy and investigative skill on Cpl. Jason Dunham… With uncommon sensitivity and meticulousness, he chronicles Dunham’s short life, emphasizing his Marine years and his tragic death in combat… Although Phillips doesn’t tackle the whole war, he offers a detailed view of one man’s corner of it. And perhaps more importantly, he provides a clear and rich portrait of Cpl. Jason L. Dunham and the people who fought beside him, supported him and loved him.”
— Brian Palmer

New York Times Book Review – August 14, 2005
“Dunham’s sacrifice was an extraordinary one –he threw his helmet on a grenade and himself on the helmet – but what makes this unembellished, uneditorializing portrait so affecting is his very ordinariness… Phillips’s moving book won’t tell you any more about why we are in Iraq, but after reading it, you’ll know who is there and may wonder why they are dying.”

Military.com – July 2005
“[An] extraordinary story… There are lots of heroes in Wall Street Journal reporter Phillips’ heart-wrenching story… [Phillips] treats his subjects with compassion and refuses to allow other issues to overshadow Jason’s story… Yes, he’ll make you cry if you have a heart.”
— Tom Miller

Curled Up with a Good Book – June 2005
“Be warned: this is a gory book. And one filled with swears, though less, I’m sure, than Marines actually use. But The Gift of Valor seems accurate… The sights, the smells, all the details evoke the desert and the hospitals. The story is gripping, and all the characters seem very real… [Phillips] still creates a vivid picture of a young Marine corporal and the valor within.”
— Janine Peterson

St. Louis Post Dispatch – June 22, 2005
“Thanks to Michael Phillips’ clear, dispassionate prose, Dunham, 21, from the tiny town of Scio in upstate New York, is becoming a symbol of the Marines and other American GIs… Phillips, a seasoned Wall Street Journal reporter… has used the highly effective device of backgrounding and describing one death on one day in Iraq. Through his careful reporting and even-handed writing, Phillips has created a powerful memoir and tribute to all Americans who have fallen in Iraq.”
— Repps Hudson

Pioneer Press (St. Paul) – June 19, 2005
“A compelling story… Parts of the book are so painful Phillips can’t bear to read them, but he shared every chapter with the Dunhams before publication so nothing would be a surprise.”
— Mary Ann Grossman

Star Tribune (Minneapolis) – June 19, 2005
“[Phillips] gives a close-up view of Marines in all of their many human contradictions. The characters in his book can be cold-blooded killing machines, while they also care for one another with an almost sappy mutual affection. This is a book about valor – told from the perspective of the Marines, not the thousands of Iraqis who have suffered terribly in this conflict. But it’s also a true-to-life picture of the grit and stench and fear you see only when you accept the risk and invest the time to get close to the combat.”
— Sharon Schmickle

The Command Post (web) – June 12, 2005
“Extremely well-researched, well-written, and engaging. Difficult to put down, the accounts of battle are riveting, and the accounts of family and character are vivid and personal.
Phillip’s account is (thankfully) apolitical … It’s a story of people, not a screed on the war… It’s an extraordinary book, one I enthusiastically recommend to others… The real story of The Gift of Valor [is] in the valor of not just those who serve, but of those who serve those who serve. This is a book about not one, but hundreds of heroes.”
— Alan

Proceedings (US Naval Institute) – June 2005
“A truly exceptional book… [The Gift of Valor] stands head and shoulders above previous Iraq books, and will also quickly assimilate into the mainstream as a ‘must read’… [Phillips] provides readers with the most significant gift a reporter can offer – he gets his story right… Phillips captures the Marine experience fighting the insurgency in Iraq better than any author to date. Phillips misses nothing with his colorful portrayal… [and] also offers humor amidst the tragedy… Corporal Jason Dunham will get his medal some day. For his efforts and skill, Michael Phillips also deserves one.”
— David J. Danelo

Armchair General – June 2005
“[Phillips] knows the Marines, and does a fine job of sharing some pretty amazing things about the Corps… I found myself immersed into the atmosphere around this Marine and… was surprised to find myself unable to put the book down… I doubt I will ever forget this true American hero. If you have any desire to learn about the men and women of the US Marines, what their families and friends must endure every day their loved one is in the hot zone, and the medical institutions backing up Allied forces, this book will be well worth your time.”
— Brian King 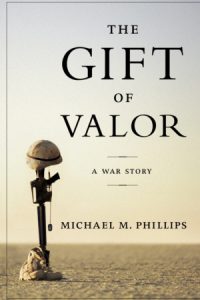