How did you come to set the book in the Aleutians? 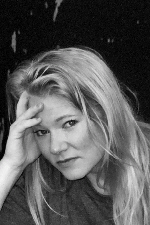 I briefly lived on Unalaska in my early 20s. I was taking time off from college and bumming around with a cute fisherman. Something about the place was so different than anywhere I’d live previously, or since. (And I’ve lived in Anchorage, Juneau, Los Angeles, Laytonville, C.A., Missouri, New York, and Montana.) At the time, I don’t remember thinking, “Wow, this is an extraordinary place.” But over the years, the feel and look of it never left me. In the book, the Aleutians have a magical quality and I guess that’s because of the way that place stayed with me, giving me a comparison for the rest of my life. I wrote an article recently about the closing of the Elbow Room, which happened in April 2005. While writing that piece and interviewing folks for it, I realized that part of the reason Unalaska was memorable was because, at least when I was there, it was perhaps the last vestige of the American frontier. There was a wild west feeling of possibility and danger and freedom that went beyond the stark natural beauty and captured a raw kind of human beauty. So it was both an awe I felt at those pinnacle mountains in green and gray rising from the Bering Sea, as well as a feeling that because this place had not yet been civilized, it still held hope and danger and second chances.

The themes of motherhood reappear several times in the book. How has being a mother influenced your work?

I actually began this book because I became a mother. I’d been doing magazine freelancing and children’s nonfiction books. When my son was born, all of a sudden it was tough to work on deadline, to travel, and to schedule interviews. My son would wake up screaming right in the middle of a hard-to-get phone interview, or, even worse, an editor would call as I drifted off for a rare nap. So I started on this story about Brandy that had been brewing, mostly in my mind and in one opening paragraph on my computer that I’d been rewriting for years.

At the same time I was researching the Aleutians and the Aleuts, I was learning to be a mother. I was learning about this overpowering protective instinct that had suddenly taken over my body. I was surprised by the ferocity of mother love, the vicious potential I felt it awaken in me. I mean I would have taken a hatchet to anyone who threatened my son. I would have pulled his vitals out. I would have turned the world upside down and beaten it like a rug to keep my son safe. These feelings were unexpected and all encompassing.

So the unexpected strength of these feelings colored how I wrote the stories of the generations of Aleut women. What stronger justification exists to break taboos, to kill, to murder, than a mother whose children are threatened? And then the same feeling leaked into Brandy, because she needed to care about something enough to kill or die for it.

First novels are often somewhat autobiographical. How much of Brandy is you?

Have you ever confused the experiences of a character in a book or movie with your own? At times, I swear I’ve lived in Australia and skydived and had an abortion. I’ve even caught myself telling someone I did something and realized, no, I didn’t, but I feel like I have because I was with a character who did it. Everything I’ve done, and seen, and read about, and wondered about, and imagined are, in ways, things I’ve done. I scavenge experiences and thoughts wherever I come across them. And then I think of them as mine.

That said, a lot of the book is auto-experiential, which is a term my husband came up when I was ranting about another “autobiographical” question. I lived in the Aleutians; I cocktail waitressed; I commercial fished in the Bering Sea; and I hung out in dive bars. I’ve noted latrinealia, ridden a motorcycle, been to a Mary Kay party or two. I’ve tried an illegal drug or two; I’ve been too drunk, slipped into caves, eaten decayed seal flipper and a lot of other weird stuff. I’ve seen women stuck in party-girl mode into their 30s, 40s, 50s and wondered about the how’s and why’s. I’ve stood in the wind over an ocean and felt something soft and possible opening in front of me. And I’ve listened to my friends’ experiences and thoughts and they’ve become part of my own.

I think this is a large part of why we read, to broaden our experiences. And to a large extent, that’s part of why I write, to bring all the scavenged experiences into focus and see what they mean to me.

What research went into writing this book?

I love research so I did a lot. And working on a book with a dominant non-fiction component was so nice. If I didn’t feel creative or blessed with the muse one morning, I could use my writing time to research. I read every book on Aleutian history and archeology I could get. I interviewed archeologists, social workers, anthropologists. I went back to Unalaska and revisited the settings of the book, toured an archeology site.

Some of the most fun research was interviewing a few of my friends to get a better handle on Brandy and her past. I had an idyllic childhood and didn’t understand Brandy’s past and how it had messed up her present with as much depth as I needed to. Fortunately a couple of my friends had good messed up parents and I interviewed them repeatedly (usually over drinks to loosen them up) until I could feel their experiences so I could write about them not just with detailed accuracy but with emotional accuracy.

Another fun research project was exploring the ideas of the book. When I wanted to explore ideas about the effects of conquest, I read thinkers who had subversive ideas about the nature of conquest. When I wanted Brandy to embrace blame for an attempted rape, I found thinkers who were going against the grain and looking at victim culpability. When I started including Roman history, I read the classics on the rise and fall of Rome. Then there was graffiti, mummies, blondness. All that was wonderful research to delve into.

What was the genesis of the book idea?

There were really two starts to this book. The first was a general question that sprung from my wayward years. I was hanging in dive bars around less than savory characters, and I’d see women doing what I was doing who were much older. I was in my 20s, when such behavior is more accepted as a sowing-wild-oats kind of thing. But there were women much older doing the same thing. I always wondered, why was this never going to be a lifestyle thing for me? I never needed to escape it, because I was playing, dabbling. I wondered what the difference between them and me was. And I wondered what it would take to shove such a woman out of that life. So that’s how I came up with the character of Brandy, who is that woman. And I knew I wanted her in Unalaska, just because it’s got the best dive bar and it’s so on the edge of everything.
But I had no idea for a story, an actual plot. Then my friend, Dana, mis-described, or I misheard, the description of a book. She described it as about a group of old women in a quilting circle who had been judiciously killing “bad” men in their community for decades. So I read the book, because, well that’s a great idea. But it turned out, the quilting biddies had only killed one man and it was in the heat of the moment, not a premeditated, assassin’s club kind of thing. I was disappointed and then I was elated because I suddenly had a plot. And as I read about Aleut history, the plot just fit better and better. And suddenly I knew how to burden my cocktail waitress with freedom. I knew what it would take to set her free and what it would cost.