There are places that can remake you — slippery, gray places. Places that hold their secrets in the fog and whisper them on the wind. And when Brandy, a floundering, trashy, Latin-spewing cocktail waitress, finds herself drifting across the line between the ordinary world and this place, something fearsome and beautiful happens. Something changes.

Sweeping across centuries and into the Aleutian Islands of Alaska’s Bering Sea, the story begins with a decision and a broken taboo when three starving Aleut mothers decide to take their fate into their own hands and survive the devastation of Russian conquest. The shadow of their heroic and tragic decision reaches forward across the generations. As cultural upheavals undulate through the Aleutian Chain, these descendants are willing to risk even more as the gold rush and World War II internment threatens their people’s survival.

Two hundred and fifty years later, by the time Brandy steps ashore in the 1980s, Unalaska Island has absorbed their dark secret, a secret that is both salvation and shame. Brandy doesn’t know why she’s here. She’s too old and too smart to be drifting so close to the edge of the known world. As usual, she is following a man with curly hair and no long-range goals. She takes a job slinging drinks at the notoriously dangerous Elbow Room, studies Aleutian history, learns to ride a motorcycle, and with a practiced psyche avoids thinking about her withered past and her abandoned future. She is fighting her own battle for survival, a battle she does not even recognize.

But the island’s secret follows her — in the odd bathroom graffiti, the old Aleut women who hike in the night, the unexplained deaths clouding the island, and the enigmatic smile of a young Aleut woman sketched centuries before. Brandy begins to pay attention. She begins to long for something more than what she has been.

In a tense interplay between past and present And She Was explores Aleut history, taboos, mummies, conquest, survival, and the seamy side of the 80s in a fishing boomtown at the edge of the world. It leaps across time and culture to a lost woman, who more than any thing needs to understand the gray shades between heroism and evil, between freedom and bondage, between this place and the rest of her life.
Questions for Discussions

1. How did your initial feelings about Brandy color the story for you? Discuss how those feelings evolved during the story.

2. Brandy experiences the Aleut women as “other” than herself. Does this viewpoint contribute to her life-changing experience? Is thinking of a different race or subculture as “other” always negative?

3. Place is an important aspect of the book. What would change for you if the book had been set somewhere more familiar, say an Ohio farming community or San Diego? Do you believe, as Brandy does, that a place can change a person?

4. How did the character of Les serve the themes of the book? What did his sexuality and the community’s reaction to him add to the story?

5. Part of Brandy’s transformation is contingent upon her realizing that the Aleut women did not see themselves as victims. Brandy, the daughter of a slut and saddled with a liquor name, is very much a product of her upbringing. Do you believe that Brandy is a victim of her past? Did she see herself as a victim?

6. The bookstore owner, Anna, says that women are in charge of whatever merged culture comes after conquest, and the Aleut women do become the dominant force in their culture’s survival. If indeed women are better equipped than men to deal with sweeping cultural changes, why do you think this is true?

8. Beginning with Aya and continuing to Bellie, the generations of Aleut women each commit crimes, at least by their own culture’s standards. In the end, even Brandy doesn’t know if they were heroes or villains. What do you think they were? How do you feel about Brandy using their actions to begin her own transformation despite her inability to categorize their acts as good or evil?

9. Because Thad is such a nice guy, some readers have felt that Brandy should have ended up with him. Could Thad have saved Brandy? How would her transformation have been different if she had remained with him?

10. Brandy refuses to tell you the who’s and what’s and where’s of how her life turned out. What do you think became of Brandy? 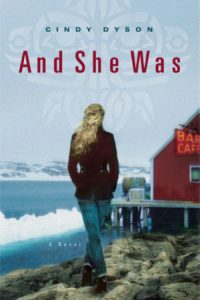