Phebe Hanson has been at work recording the book of her life since the day after Pearl Harbor in 1941. If a 21st century reader wanted to know what it felt like to be an intelligent, witty, sharply observant woman—a daughter of pious Scandinavian immigrants, a wife and mother and finally a late-blooming poet and teacher of enormous talent, they could do no better than read the work of Phebe Hanson. Here is the real texture of daily life, the sound of real voices, the affect of wars, movements, fashionable foolishness on the sensibility of a skeptical but humane intelligence. No self-pity in Phebe Hanson’s work, only a sense of wry amazement that foolish humans can still sometimes make beauty, do good and love one another, almost in spite of themselves.

“Phebe Hanson has a great gift for that clear look at the delights and suffering of the soul in ordinary life; her poems are skillful, well-formed and moving.”
— Robert Bly, author of Silence in the Snowy Field and Iron John

Walt Whitman thought of Leaves of Grass primarily as an experimental attempt to set down the real life of a man, without braggery, whining, or false sentiment in the 19th century. Phebe Hanson does Walt’s work admirably for the life of an American woman in two-thirds of the 20th century. She does this with clarity, humor, and a keen eye. Her work needs a public but even more, the public needs this work.
— Bill Holm, author of Coming Home Crazy

Phebe Hanson writes in the American vernacular, but her subject is the American sublime. In poems by turns comic and harrowing, she testifies to the enduring buoyancy of good faith and resilience of keen attention. How does a voice so immediate, so down-to-earth sing such rhapsodies? These are poems to read aloud–alone and with those you love.
— Patricia Hampl, author of A Romantic Education and I Could Tell You Stories

The poems in WHY STILL DANCE are so good that when I finished reading them, I wanted to weep with joy at what Phebe Hanson had done with words and with her 75 years of life.
— Howard Mohr, author of How to Talk Minnesotan and A Minnesotan Book of Days. 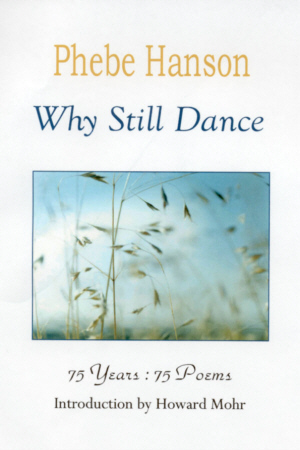