Adventures in the Delectable World of French Cheese

The French, san doute, love their fromages. And there’s much to love: hundreds of gloriously pungent varieties-crumbly, creamy, buttery, even shot through with bottle-green mold. So many varieties, in fact, that the aspiring gourmand might fairly wonder, How to make sense of it all?

In The Whole Fromage  Kathe Lison sets out to learn what makes French cheese so remarkable-why France is the “Cheese Mother Ship,” in the words of one American expert. She meets the dairy scientists, shepherds, affineurs, and cheesemakers who make up the world of modern French cheese and whose lifestyles and philosophies are as varied and flavorful as the delicacies they produce. She meets head-on the polemics of self-appointed defenders of traditional French cheese, who consider themselves the last best hope against American-style sanitation, standardization, and fast-food culture. And most delicious of all, she meets the cheeses themselves-from spruce-wrapped Mont d’Or, so gooey it’s best eaten with a spoon; to luminous Beaufort, redolent of Alpine grasses and wildflowers, a single round of which can weigh as much as a Saint Bernard; toCamembert, invented in Normandy but beloved and imitated the world over.

With writing as piquant and rich as a well-aged Roquefort, as charming as a tender springtime chevre, and yet as unsentimental as a stinky Maroilles, The Whole Fromage is a tasty exploration of some of the great culinary treasures of France.

“From the Loire Valley to the Alpine slopes, Lison’s journey is très amusant…Lison captures a passion of all things fromage.”
— Rob Kaufelt, owner of Murray’s Cheese

“This look at the land of 350 (or is it 650?) cheeses considers why a country smaller than the state of Texas has devoted so much of its culinary-rich life to fermenting milk. Wisconsinite Kathe Lison introduces readers to “the pope of cheese,” “lait cru,” and religion’s role in France’s holy wheels. A thorough, inspired look at France from a devoted and curious cheese lover and writer.”
— Kirstin Jackson, author of It’s Not You, It’s Brie: Unwrapping America’s Unique Culture of Cheese

“France is a cheese-driven country, and this book gets right to its pungent, creamy heart.”
— Stephen Clarke, author of 1000 Years of Annoying the French

“Reading The Whole Fromage is like enjoying an illicit raw-milk Brie. Kathe Lison follows her nose across France to explore the country’s wild obsession with cheese. Along the way, she meets cherubic farm wives who breed their goats for beauty, legendary affineurs who spend their days tending rinds, diehard policy wonks who decry pasteurization, and proponents of a mysterious “whey cure.” If Joan Didion had fallen tastebuds over heels for French cheese, then she might have written this book.”
— Tenaya Darlington, author of Di Bruno Bros. House of Cheese: A Guide to Wedges, Recipes, and Pairings 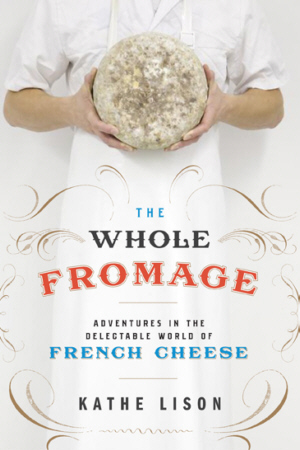