Star Tribune (Minneapolis) – July 31, 2013
The Whole Fromage’ at M&Q
When Lucia Watson enthuses about a book, people listen. Of “The Whole Fromage” by Kathe Lison, Watson (of Lucia’s Restaurant) says that the book expresses Lison’s “loving familiarity with the wonderful and complex world of French cheese. It takes you from the fields where the animals graze, through the creamery, shops and right to your table. Prepare to devour this book! And prepare to be hungry!” Kirkus Reviews also included the book on its list of “nine epic true-life adventures to read this summer.” How handy, then, that Lison will be reading, answering questions and signing her book at 7 p.m. Aug. 8 at Magers & Quinn, 3038 Hennepin Av. S., Mpls. The book traces Lison’s travels from the last cheesemaking burons in the pastures of Auvergne and the Abbaye de Tamié, where monk-made Tamié ages in caves beneath the cloisters, to the headquarters of Isigny Sainte-Mère, where a True Camembert Defense Committee was founded in the wake of laws against making Camembert with raw, untreated milk. In short, a great melding of cuisine, history and culture.

Kirkus Review – May 15, 2013
“Her curiosity piqued by the multitude of French cheeses, essayist and self-proclaimed cheesehead Lison chronicles her tasty culinary journey exploring the art and science of French cheese making…. Whether Lison is ruminating on the short lactation cycle of sheep, the origins of rennet, or the grassy, lemony taste of a spring goat cheese, readers will have all their senses engaged.”

Booklist – May 15, 2013
“If anyone in America has a right to claim authority on the subject of cheese, author Lison does…. A lot of books have been published about the history, culture, and virtues of France’s cheeses, but this one celebrates the farmers, dairymen, and cheese makers who have established France’s cheeses as still the world’s standard.” 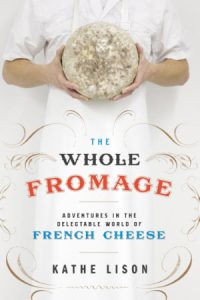