THE RIPPLE EFFECT: How Better Sex Can Lead To A Better Life by Gail Saltz, M.D.

We’ve all seen the sort of woman who can walk into a room and pow! Everyone feels a pull toward her, a great gravitational tug. She’s confident. She’s dynamic. She’s comfortable in her own skin. THE RIPPLE EFFECT will help readers become that kind of woman.

What these women have going for them isn’t a secret. But it’s the key to being sexy, self-assured, and magnetic. How a woman sees herself sexually determines how she thinks, feels, and behaves in almost every other arena, public or private. Her sexuality isn’t just the key to finding out who she is; it’s the key to figuring out who she can become. Improve a woman’s view of her own sexuality, and not only will she have better sex, she’ll have a better life. It’s the Ripple Effect.

For the millions of women who have simply given up on sex, THE RIPPLE EFFECT promises to be a revelation. Through closely examining the stories women tell themselves about their sexuality and about who they are, psychiatrist Gail Saltz, MD asks readers to reflect on their own feelings and beliefs and ultimately guides them toward understanding the power of their own sexuality. Alternately funny, poignant, and insightful, this book is a road map to understanding and improving how women feel about sex and most importantly, about themselves.

Psychiatrist, columnist, bestselling author, and television commentator Gail Saltz, MD has been called “a voice of wisdom and insight in a world of confusion and contradictions” by Tom Brokaw. She is a regular contributor to the TODAY show and O, The Oprah Magazine as well as numerous other programs and publications.

(You will find  there numerous links to various interesting articles and TV appearances of Dr. Saltz) 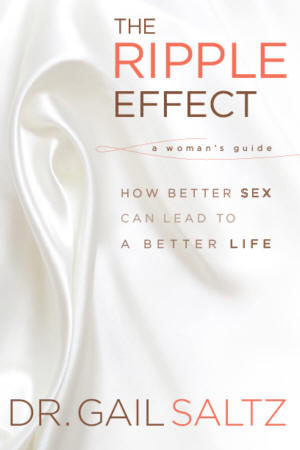