Anatomy of a Secret Life: The Psychology of Living a Lie

ANATOMY OF A SECRET LIFE: The Psychology of Living a Lie by Gail Saltz, MD

Everyone has a part of himself that no one else knows about. In a teenager, it’s a healthy move towards becoming independent. In an adult, it can keep the spark of romance alive. But when do secrets become destructive? What drives a person to live a double life – to be a soccer dad by day and a pimp by night? To live one part law-abiding, upstanding citizen while another part secretly shoplifts, gambles away the college fund, or even commits armed robbery or murder? Everywhere, we’re discovering that our neighbors trade spouses, are married when they’re secretly gay, or are up to behavior that no one ever expected from them. Psychoanalyst Gail Saltz delivers a profound examination of how a secret life is formed, lived, justified, and exposed. She shows through historical figures as well as contemporary case studies what pushes people to deviate so far from the norm that they end up wreaking havoc on their own lives and the lives of those around them.

Gail Saltz, M.D., is a psychiatrist, psychoanalyst, and the mental health contributor to NBC’s top rated Today Show as well as a frequent guest on Oprah. She has contributed articles to Parade magazine, has a regular column on MSNBC’s website, and is a contribution editor to Glamour magazine. She has appeared on CBS News, Dateline, and has been featured in The New York Times, The Daily News, and The Los Angeles Times. Married and mother of three, she lives in New York City.

“In this gripping book, Gail Saltz analyzes the origins and consequences of hidden lives, articulating both the seductions that secrets hold and the terrible danger they pose as they undermine the capacity for intimacy. This is a brave examination of the balance between safety and loneliness that we all negotiate at one level or another.”
— Andrew Solomon, author of The Noonday Demon: An Atlas of Depression
Visit Dr. Gail Saltz website…

(You will find  there numerous links to various interesting articles and TV appearances of Dr. Saltz) 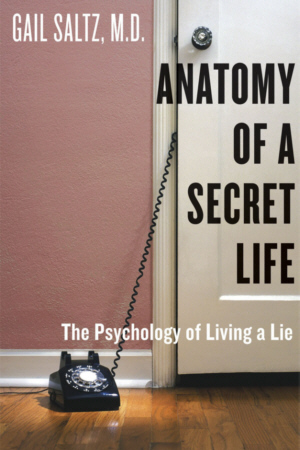