The Blind Astronomer’s Daughter is a dazzling new historical novel, by the author of Woodsburner, about one woman’s life in a time of stunning scientific advancement and violent rebellion.

In late-eighteenth-century Ireland, Arthur Ainsworth and his adopted daughter, Caroline, spend their nights searching the skies for an uncharted planet that they believe is hiding inside the orbit of Mercury. But when William Herschel—who at this time is still an obscure musician and amateur astronomer living in Bath with his sister Lina—stumbles upon distant Uranus, Arthur Ainsworth is overwhelmed by jealousy, his quest turns obsessive, and he eventually ruins his eyes by staring recklessly into the sun. Soon after, Arthur throws himself from his rooftop observatory in despair, and Caroline discovers that her own life hides mysteries rivaling those of the heavens.

Grief-stricken, Caroline at first abandons the vain search for a new planet, and she leaves Ireland for London in an effort to forget her unrealized love for Finnegan O’Siodha, the tinkering blacksmith who was helping her father build a massive telescope larger than Herschel’s own. Finn, too, attempts to ignore his passions; he travels to Edinburgh to start a new life only to find that he cannot keep Caroline from his thoughts, and he begins working tirelessly to ensure that their trajectories reconvene. He sends out a series of forged letters to draw Caroline back to Ireland, and when she returns she discovers that her father has left her more than just the wreck of the unfinished telescope: his cryptic atlas holds the secret to finding a new world (later to be named Neptune) at the remote edge of the sky. Caroline and Finn seem poised to resume the search and confront their reawakened longing, but they find themselves caught up in the fiery rebellion that sweeps through Ireland in 1798.

Meanwhile in Dublin Castle, James Samuels, a reluctant assistant to the viceroy, watches the threat of rebellion grow as he dreams of adventure and plans his escape. A former music student of William and Lina Herschel, James dreamed of exploring the world until a peculiar and persistent sleeping sickness thwarted his ambitions. When the rebellion erupts, James knows he must flee Ireland if he is to have any chance at visiting the distant lands on his maps, but he is wholly unaware of how the course of his life—already shaped by the turbulent currents of chance and history—will ultimately bring him into the path of Caroline Ainsworth at a critical moment for both.

Drawing upon factual events, this is a novel about the obsessions of the age—scientific inquiry, geographic discovery, political upheaval—but above all astronomy, the mapping of the solar system and beyond. And at the same time, it is a novel that explores the abiding concerns of every generation: the irrevocable yearning for human connection, and the quest to understand the powerful forces of gravity and attraction that bring worlds and people together. The Blind Astronomer’s Daughter is rich, far-reaching, and unforgettable.

In The Blind Astronomer’s Daughter, John Pipkin, one of our most accomplished novelists, gives us a universe of stars, comets, and planets half-perceived through crude 18th century telescopes and half-deduced through mathematics; not computers, but the brains of women perform the calculations. Utilizing history and imagination, Pipkin creates two complex and touching women, both called Caroline, who love and serve two male astronomers–one is Caroline’s father and the other is the second Caroline’s brother. Comet-like, a boy genius of compassion and mechanics streaks across their lives. All Pipkin’s characters are formed by both their innate gifts and a universe flawed by violence and injustice based on gender, social class, religion, and nationality. Pipkin’s stylistic brilliance holds all these elements together with a force as effective and inclusive as gravity.
— Sena Jeter Naslund, author of Ahab’s Wife and The Fountain of St. James Court, or Portrait of the Artist as an Old Woman. 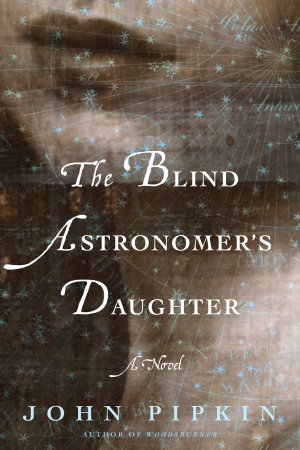