May the Road Rise Up to Meet You

An engrossing, epic American drama told from four distinct perspectives, spanning the first major wave of Irish immigration to New York through the end of the Civil War.

Four unique voices; two parallel love stories; one sweeping novel rich in the history of nineteenth-century America. This remarkable debut draws from the great themes of literature—famine, war, love, and family—as it introduces four unforgettable characters. Ethan McOwen is an Irish immigrant whose endurance is tested in Brooklyn and the Five Points at the height of its urban destitution; he is among the first to join the famed Irish Brigade and becomes a celebrated war photographer. Marcella, a society girl from Spain, defies her father to become a passionate abolitionist. Mary and Micah are slaves of varying circumstances, who form an instant connection and embark on a tumultuous path to freedom.

All four lives unfold in two beautiful love stories, which eventually collide. Written in gorgeous language that subtly captures the diverse backgrounds of the characters, and interspersed with letters, journals, and dreams, this unforgettable story, rendered in cinematic detail, is about having faith in life’s great meaning amidst its various tangles.

“The Sesquicentennial of the American Civil War has arrived. Histories and novels of the now not so recent unpleasantness are popping up all around us. So many stories, so little time — What are we to read?
I, for one, would recommend Peter Troy’s May the Road Rise Up to Meet You. Troy weaves an epic tale of triumph and sorrow in the years before and during the war around the lives and voices of four individuals struggling to survive a world packed with noble hopes and chaotic events. Through the lives of Ethan, Marcella, Mary and Micha, Troy reminds us again and again why The American Civil War remains the single most important moment in our history. Beautifully told, Troy has given us a story that will be with me for many years to come.”
— Robert Hicks, New York Times bestselling author of The Widow of the South and A Separate Country

“To read this book is an enriching, unforgettable experience.It is told in utterly true and authentic voices that reach the soul and linger in the heart.The nation needed Peter Troy’s novel to remind us of what we were and who we can become.”
— Leila Meacham, New York Times bestselling author of Roses 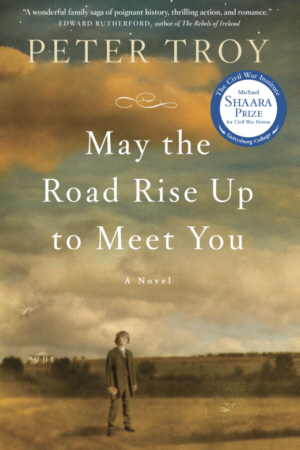