May the Road Rise Up to Meet You

An engrossing, epic American drama told from four distinct perspectives, spanning the first major wave of Irish immigration to New York through the end of the Civil War. The following questions, written by the author, are intended to enhance your reading experience and to generate lively discussion among the members of your book group.

1. All four main characters are greatly influenced by a loved one who has passed away. Describe the significance of each of these relationships and how they impact the still living characters.

2. Discuss the impact reading and writing have on of each of the four main character’s lives.

3. Each character is assigned their own narrative voice and grammatical structure throughout the book. How and why do they change, either subtly (Ethan, Marcella, Micah), or dramatically (Mary), as their stories progress?

4. For each of the four main characters, the Civil War, in a manner of speaking, “makes” them. How does the outbreak of the war alter their lives permanently?

5. How are the love stories of Ethan and Marcella, Mary and Micah similar?

6. In The Odyssey, Odysseus was said to have spent twenty years away from home. How is his story connected to Ethan’s similar journey?

Each of the four main characters is born into a situation where he or she is instructed in no uncertain terms to understand their “place”. Whether it is at the lowest or highest levels of the societal hierarchy, there are quite specific sets of instructions on how to properly behave so as not to place themselves outside the realm of normalcy.

7. Discuss the general restrictions placed upon each character, Mary and Micah as slaves, Marcella as a woman, Ethan as a poor Irishman.

8. How is each character reminded by someone close to them to stay within the range of accepted behavior?

9. How is the psychological impact of these instructions portrayed in each character?

10. How does each character, either secretly or overtly, rebel against those same instructions?

11. What are the results of these rebellions and how does it alter the life of each character?

The “Great Hunger” (also called the “Potato Famine”) in Ireland is a generally misunderstood period in history, often being left out completely from American textbooks or covered only for the impact it had on Irish immigration to America. It is estimated that more than one million deaths could be attributed to disease and starvation between the years of 1846-1851, and between death and emigration, Ireland’s population decreased by fully 20% during those few years.

12. Considering that Ireland continued to export food to England during the worst years of The Hunger, why is the term “famine” a misnomer, and how does it reflect the notion that the winners write the history books?

13. How is Ethan’s family impacted by the rule of the English crown?

14. Why might Ethan’s Mam consider the stories Mr. Hanratty tells Ethan to be potentially quite dangerous?

15. How does Mr. Hanratty’s statement to Ethan, “If it’s a happy tale yer after, den sure you was bahrn in th’wrong land,” reflect the tragic impact English policies had on Irish attitudes?

16. As Ethan views his native land in the increasing distance from onboard the ferry, he begins to understand why Mr. Hanratty would refer to Ireland as “she” or “her” and not “it”. Discuss the emotional impact leaving one’s native land under such circumstances would have on a person. How might that affect how they view their adoptive country in ways good and bad?
African-American:
The issue of race has been a contentious one in American society, politics and culture from the very early days of the Colonial Age until the present day, often impacting the portrayal of different characters in film and literature through a stereotypical lens.

17. How are Micah and Mary different from the stereotypical slave?

18. How is their ascent from slavery first a mental journey, then a physical one?

19. The range of slave/owner relationships in the book is extensive, from brutality to pseudo-love. How does this reflect the psychological and emotional impact of slavery on both the slaves and their owners?

20. How is the relationship that develops between Ethan and Micah made possible? What encounters along their journeys are critical in forming their attitudes towards each other?

The author has said that the book, while set amidst the backdrop of great historical moments, is at its core about faith.

21. While faith is never discussed in specific terms, how is Gertie’s stitchin’ in the prologue, and its connection to the final scene, a metaphor for faith?

22. If anger, hurt, disappointment, fear and doubt are some of the principle obstacles to faith, how do these elements affect the four main characters? Discuss specific moments when each of them confronts these aspects within themselves and the change, if any, which comes from them.

23. What is the significance of the term “frontsways”? Where does it come from originally and how does it apply to the journey of all four characters?*

24. How is the author’s use of different narrative voices, perspectives, and grammatical structure, a metaphor related to this very theme?

*The author recommends the e.e. cummings poem “I thank you God for this most amazing,” for further reflection on the idea of “frontsways”. 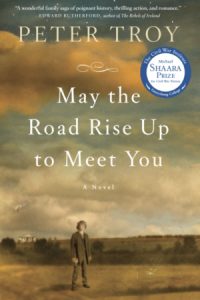