The idea for COME NOVEMBER, the debut teen novel by Katrin van Dam, took root after she read a newspaper article about an old-school radio prophet who predicted the world would end on May 23, 2011. Many of his listeners believed him, and dedicated their lives (and in some cases, all their money) to following him. What happened the day after, once his believers found their leader was wrong? Come November brilliantly uses contemporary, realistic fiction to explore that question.

Rooney Harris is entering her senior year, the culmination of all she’s achieved. She’s the editor-in-chief of her school newspaper and dreams of pursuing her interest in journalism at Columbia University. She has largely learned to tune out her divorced mother, Anneliese, who is obsessed with the Next World Society, an environmentalist doomsday cult. The group’s charismatic leader has convinced his followers that they’ve been chosen to depart Earth on November 17th in order to build a better, more balanced world, but Rooney’s having none of it. Still, when Anneliese loses her job, Rooney has to shelve her dreams to keep food on the table for herself and her little brother, Daniel, while the rest of her class goes on enjoying senior year and planning for college. With the support of her good friend (and burgeoning love interest) Mercer, Rooney is just trying to make it to November 18th, when everything will go back to normal. But what she finds is that there is no normal after the end of her world.

A wonderfully original debut novel, Come November is the story of a resilient, witty young woman who must come to terms with dashed hopes, the truth about her parents, and a world in which she struggles to find her place even as she rises above it all. For readers of Karen Thompson Walker’s NYT bestseller The Age of Miracles, this book is an exploration of what it means to be thrust into adulthood before one’s time. For its exploration of a cult life, it may appeal to readers of fiction such as Gated by Amy Christopher Harper.

“Thought-provoking, moving and very insightful, Come November is the compelling story of a girl on the brink of adulthood struggling to survive a harrowing, all-too-grown-up present, while bravely laying claim to a brighter future and making peace with the complexities of her family’s troubling past.” — Kimberly McCreight, New York Times bestselling author of Reconstructing Amelia and The Outliers Trilogy. 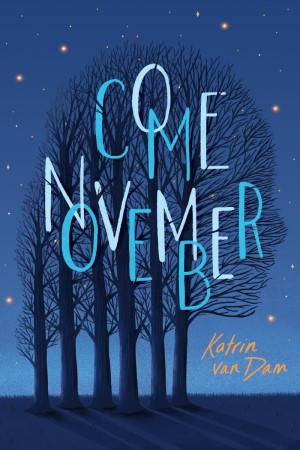