Kwei Quartey’s debut novel Wife of the Gods charmed reviewers and readers alike. With his protagonist Inspector Darko Dawson, literary fans found a new keen-eyed and all too human detective to root for. In CHILDREN OF THE STREET Dawson returns to solve an even more gruesome and perplexing case.

In the slums of Accra, Ghana’s fast-moving, cosmopolitan capital, teenagers are turning up dead. Inspector Darko Dawson has seen many crimes, but this latest string of murders—in which all the young victims bear a chilling signature—is the most unsettling of his career. Are these heinous acts a form of ritual killing or the work of a lone, cold-blooded monster? With time running out, Dawson embarks on a harrowing journey through the city’s underbelly and confronts the brutal world of the urban poor, where street children are forced to fight for their very survival—and a cunning killer seems just out of reach.

Through first-hand research on the streets of Accra, Quartey paints a vivid picture of Ghana as a country full of contradictions. Between the push and pull of tradition and modernity, wealth and extreme poverty, readers will no doubt be mesmerized by this latest installment in the Inspector Darko Dawson Mystery series.

“Kwei Quartey does what all the best storytellers do. He takes you to a world you have never seen and makes it as real to you as your own backyard. In Children of the Street he brings a story that is searing and original and done just right. Inspector Darko Dawson is relentless and I look forward to riding with him again.”
–Michael Connelly author of The Reversal and the Ninth Dragon 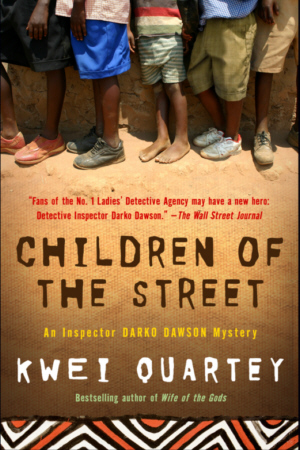