THE SPACE BETWEEN US by Thrity Umrigar

She worked in the house I grew up in, year after year, a shadow flitting around our middle-class house, her thin brown hands cleaning furniture she was not allowed to sit on, cooking food she was not allowed to share at the family dining table, dusting the stereo that mainly played American rock and roll, music that was alien and unfamiliar to her, that only reminded her of her nebulous presence in our home, our world, our lives.

I wrote about Bhima and that stereo in another book—told the story of that glorious day when, after a year of cajoling, wooing and seducing Bhima, after trying to excavate her life and story bit by bit, I finally tasted success. I was an earnest, well-meaning teenager and I loved Bhima for reasons that today make me proud as well as make me cringe, for reasons that were vain as well as honorable: I loved her because even at 15, I could sense her essential goodness and dignity and stoic heroism. I loved her because she was amused by me and my eager, puppy-dog need to prove to her that I was different; that unlike the adults around me, I was uneasy being a card-carrying member of the middle class. I loved her because she cooked me rice everyday, even if it meant defying the authority of my aunts and mom. I loved her because I had just declared myself a Socialist and Bhima was my own private laboratory, my personal experiment, on whom to try out my newly discovered theories of social justice and the proletariat and the revolution.

And on one breakthrough day it all came together, the day when Bhima and I were alone at home and she plopped down next to me on the forbidden couch and demanded that I replace the music I was listening to—it was The Beatles’ Let It Be—with an old Marathi folk song that I had played the previous day. And the authority in her voice thrilled me, made me feel that we were equals at last, that the cursed roles of servant and mistress had shattered for one fragile, shimmering instant.

And yet, even in the midst of my adolescent disdain for the middle-class adults in my life, I saw enough complexity in the transactions between servant and homeowner to soften that disdain, to make me realize that reality is always harder than caricature. I saw servants trusting their meager savings to their mistresses as a way of protecting their money from the grasping hands of drunken husbands; I saw Bhima and the females in my household working peaceably together in the kitchen in a kind of domestic shorthand; I watched as my aunts cooked an egg for Bhima every morning while she was recovering from malaria.

Above all, I was fascinated by this intersection of gender and class—how the lives of women from the working class and the middle-class seemed at once so connected and so removed from each other.

Thus was Sera born—kindly, well-meaning Sera, who must nevertheless choose between the bonds of gender and the divisions of class.

It is a theme that has interested me—haunted me, even—for as long as I can remember. One of the reasons I have always loved Bombay is because it is a city riddled with contradictions and paradox. In an apartment in a small corner of the city, I grew up experiencing a microcosm of this larger paradox—this strange tug-of-war between intimacy and unfamiliarity; between awareness and blindness.

THE SPACE BETWEEN US is an attempt to understand, through the illuminating searchlight of fiction, paradoxes that I could never make sense of in real life. I began the novel in the spring of 2003. But in fact, I have been writing this book forever. 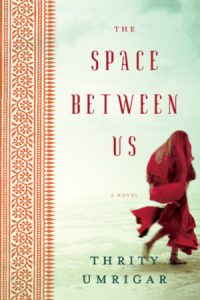