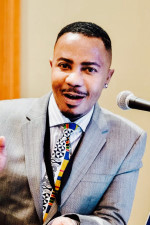 The idea for Wife of the Gods was born late at night in a Paris hotel room. While surfing television channels, I came across a riveting documentary about a detective trying to solve a murder in rural Ivory Coast. He was a brutal man who beat villagers up and exploited their superstitions to get them to talk. It was raw television that made American “reality” TV shows look like tea at Buckingham Palace. In a moment of epiphany that trounced my jetlag, I decided to write a murder mystery set in rural Africa. I would set it in Ghana, which is Ivory Coast’s neighbor to the east along the West African coast.

As in the documentary, my story would center around a loutish, corrupt village police superintendent. He would naturally need a moral force to oppose him. Enter Darko “Dark” Dawson, the detective sent from the big city to “solve the murder.” It doesn’t take long for Dawson to discover that things run differently far from the city, nor is it long before he butts heads with the superintendent.

I understood how Dawson would face indigenous superstitions in this rural setting because I grew up in Ghana, where one often hears references to ‘juju’, i.e., objects or practices that have evil magical powers. Such superstitions are part of a wider belief system involving witchcraft, curses, and the power of gods and ancestors.

Both my parents were university professors, my father Ghanaian and my mother American, and neither of them professed to such beliefs. The University of Ghana campus where I grew up was hardly a bastion of witchcraft or juju, but I still heard stories. One rumor that stayed in circulation for several weeks alleged that someone was using juju to make men’s penises shrink. This tale, which I found highly amusing, still resurfaces every so often.

Even if it is not universally accepted, belief in witchcraft as the cause of any misfortune, from illness to a poor harvest, is strikingly prevalent in Ghana. For my as yet unnamed book, I envisioned the murderer using this specter of witchcraft as a foil for his own crime.

While writing and researching my plotline, I saw another television program that was to contribute to the writing of the novel. 60 Minutes did a segment describing the plight of a number of girls and young women known as trokosi in southeastern Ghana. They are “given” as wives to fetish priests to atone for a family crime, often committed generations ago. They are referred to as “wives of the gods,” but another translation of the word trokosi is “slave of the gods,” which may be more appropriate in view of how these girls and women are treated. Although the involved fetish priests deny the accusations, it seems clear from many sources that they physically and sexually abuse their slave wives in addition to ruthlessly working them to the bone.

I was astonished and angered by what the 60 Minutes piece had shown. One of the trokosi was barely ten years old. Her vulnerability was wrenching. I knew I had to write about this tradition, which I found so unsettling, and I chose the name for the novel as a kind of dedication to these girls and women: Wife of the Gods. As a physician, it was impossible for me not to include related medical aspects of such a story, in particular AIDS, and the tension between traditional healing and “conventional” medicine. It took several rewrites to tie all these aspects together, and although the ultimate raison d’ètre of a novel is to entertain, it was important for me to embrace the questions Ghanaians face in real life.

Writing has been a lifelong pursuit for me starting from at least the age of eight, when I wrote three adventure/mystery novellas complete with stapled-on dust jackets. The creation of different worlds that are compelling and transporting has always been deeply satisfying to me.

So, now, I would like to formally introduce to you Detective Darko Dawson. And please don’t call him “Dark.” Only his wife can do that. 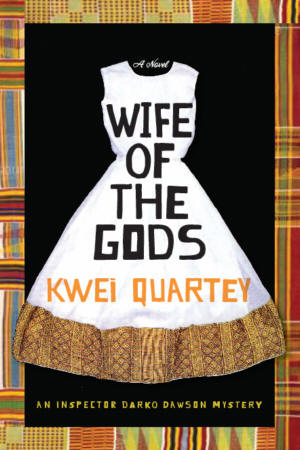