The Story Behind The Book

THE KING AT THE EDGE OF THE WORLD – in author’s words.

The War on Terror has been with us for nearly twenty years now. It has changed our relationship to travel, to privacy, to one another. It is hard to imagine how it ever comes to an end; we have soldiers fighting it who weren’t even born when it started. We reorganized our intelligence agencies to fight it, and we wonder if they are going too far on our behalf. We have traded freedom for security, and fear we may end up with neither.

None of this is new. The English lived through it all four hundred years ago. They even invented the modern intelligence agency to fight their war.

In the 16th and 17th centuries, England was engaged in a War on Terror, battling religious extremists, a War on Terror that looked shockingly like our own. Heroism against a remorseless enemy. An intelligence agency in a relentless shadow war. A national trauma from a massacre lingering on for decades. A country’s insecure identity as it wrestled with fear and paranoia and justifications over torture. The ambiguity of a covert war that took on a real, implacable enemy, but also confused legitimate dissent with terror and treason. All of this: the English under Queen Elizabeth I went through something painfully familiar to us.

The enemy was not motivated by Islam, but by Catholicism. Yet it was described in the same terms we use now: driven by their false religion, the extremist is invisible but lurking. They’re training in foreign camps, drunk on visions of martyrdom, and they are sneaking into our country, hiding amongst the immigrants and refugees that we are foolishly letting in. Some of our own neighbors are helping them. They hate us, they hate our freedoms, they’re going to kill us, enslave us, force us to worship their false god, sell us out to our enemies. They’ve got moles in places of power. Their influence is spreading. They’ve got bombs set to go off. And when rational security concerns congeal into paranoia, the government recites the now-familiar refrain: You’re either with us or you’re against us.

For an English person, taking sides (even secretly, even only in your heart) implied risks greater than life and death: they were eternal risks. The national (and viciously enforced) religion changed four times in the course of 24 years. A man could be hung by the neck, cut down while still alive, and then hacked to pieces in a public square for preaching the same religion his parents had practiced with royal approval. Just keeping up with changes and ritual was hard enough, but recall that these were people of deep faith. They believed in literal damnation, in the eternal suffering of their souls, the souls of their countrymen, the souls of their children.

The lines kept shifting, and every single person in the country had to sort this out, many of them more than once. Would you be faithful to the queen? To God? To the Pope? To the priest you grew up with, who’s now hiding in your basement and helping smuggle weapons into the country to create the kingdom of God, intending to kill the queen?

Blasphemy—saying the wrong thing, even thinking the wrong thing—was a capital crime. All of this was about a feeling. A feeling that was easy to lie about. For the newly invented security service, it was a daunting counter­terrorism espionage problem. The secret that every English person carried in his or her heart was of the utmost celestial security and national security importance: what do you believe, really?

My novel, THE KING AT THE EDGE OF THE WORLD, began with a fascination with this knotty intelligence question: in a world where a thoughtless comment can get you disemboweled, people try desperately to tow the line and never reveal their dissent. So how can a spy subtly spelunk into and out of someone’s secret heart, lifting their darkest secret without them noticing? How can you get someone to talk without ever letting them notice that they’re revealing the truth?

And when everyone is a suspected terrorist, and suspects just keep multiplying, when our enemy is determined to murder us and then die for God, how the hell does a war on religious terror ever end?

That question seems to me ever more relevant. 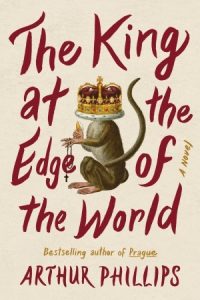