For more reviews, actually a lot more than we have here please see the review page for this title on Arthur Phillips’  web site here: https://www.arthurphillips.info/the-tragedy-of-arthur-reviews

Salon.com – April 24, 2011
“An ingenious new novel… …indeed, a tragedy of authorship, but it is also the story of a man whose self-inflicted, tragicomic woes are as affecting and wincingly believable as those endured by the hero of any conventional fiction. That Arthur’s spectacular crash-and-burn comes nestled in a web of ingenious and very funny literary allusions only makes it that much more of a treat.”
— Laura Miller

Washington Post – April 20, 2011
“What is “The Tragedy of Arthur”? Is it, as the evidence suggests, an edition of an unknown play by William Shakespeare, prefaced, quite properly, with a detailed history of the events leading up to the discovery of the 1597 quarto, the basis for the present Random House text? The reader must judge. Given our contemporary inclination to skepticism about everything, it is only natural that some uncertainties will always remain about the play’s authorship… Certainly, “The Tragedy of Arthur,” however you view it, shows off a writer at the top of his game. Just remember what Touchstone says in “As You Like It”: “The truest poetry is the most feigning.”

National Public Radio – April 19, 2011
“It’s no secret that Arthur Phillips, king of a round table of self-deluded characters, is a devotee of Vladimir Nabokov. All of his novels, beginning with Prague (2003), showcase disarmingly brainy playfulness, rapier wit and acrobatic verbal sparring. His fifth book, The Tragedy of Arthur, is his wildest and funniest yet, at once homage to Nabokov’s Pale Fire, satire of literary hagiography in general and Shakespeare scholarship in particular, and a hilarious yet trenchant riff on memoirs. His concept is so clever and fantastic — a long-lost Shakespeare tragedy is reluctantly ushered into print by Arthur Phillips, the skeptical son of a convicted forger — that the only question, through guffaws, is whether he can sustain it… Full of jousting and jesting, the thrust and parry of The Tragedy of Arthur is deliciously stimulating.”

The New York Post – April 17, 2011
“In today’s world, where writers feel free to peddle their memoirs complete with made-up stories, Phillips (“Prague”) has come up with something kind of brilliant. It’s a “memoir” about a struggling writer named Arthur Phillips, the son of a con artist…”

Wall Street Journal – April 16, 2011
“Arthur Phillips plunges into this miasma of Bardolatry with a devious and exhilarating novel, “The Tragedy of Arthur” (Random House, 368 pages, $26), a tale about—and, most audaciously, containing—a supposedly newly discovered Shakespeare play. Tricks and misdirection have been elements of Mr. Phillips’s previous novels (his 2002 debut, “Prague,” is set in Budapest), but this is far and away his most ambitious endeavor, a wild “Thomas Crown Affair” of a novel. It’s also an irresistible family drama bundled into an exploration of fraud and authenticity, packaged as an ingenious prank…
…Few people write winsome young men better than Mr. Phillips… You can tell that Mr. Phillips is only half-kidding about the comparison. The most brazen thing about this brazen book is its explosion of the mystical reverence that attends the Swan of Avon (“the Shakespeare- industrial complex,” as Arthur calls it). Imagine, Mr. Phillips says, if this play really were deemed authentic: Would it suddenly seem better, more charged with truth and beauty, because Shakespeare wrote it?”

Star Tribune (MN) – April 16, 2011
“Arthur Phillips’ “The Tragedy of Arthur” is a circus of a novel, full of wit, pathos and irrepressible intelligence. Yet its most impressive trick is tempting you to believe it’s not a novel after all… …The main story is a rich commentary on manipulative memoirs, a lively survey of Shakespeare scholarship, and, most important, a compelling story about family that has its own Shakespearean shape.”

Entertainment Weekly – April 13, 2011
“…Phillips invests the metafictional gamesmanship with bracing intelligence and genuine heart. The fun starts with the opening line — ”I have never much liked Shakespeare” — and the energy never flags as the book develops into both a literary mystery and a surprisingly effective critique of the Bard.” A-

Starred Publishers Weekly – February 28, 2011
A long-lost Shakespeare play surfaces in Phillips’s wily fifth novel, a sublime faux memoir framed as the introduction to the play’s first printing–a Modern Library edition, of course. Arthur Phillips and his twin sister, Dana, maintained an uncommon relationship with their gregarious father, a forger whose passion for the bard and for creating magic in the everyday (he takes his kids to make crop circles one night) leave lasting impressions on them both: Dana becomes a stage actress and amateur Shakespeare expert; Arthur a writer who “never much liked Shakespeare.” Their father spends most of their lives in prison, but when he’s about to be released as a frail old man, he enlists Arthur in securing the publication of The Tragedy of Arthur from an original quarto he claims to have purloined from a British estate decades earlier, though, as the authentication process wears on–successfully–Arthur becomes convinced the play is his father’s greatest scam. Along the way, Arthur riffs on his career and ex-pat past, and, most excruciatingly, unpacks his relationship with Dana and his own romantic flailings. Then there’s the play itself, which reads not unlike something written by the man from Stratford-upon-Avon. It’s a tricky project, funny and brazen, smart and playful. (Apr.)

Starred Library Journal – February 15, 2011
A memoir and a Shakespearean play wrapped into a novel? Who could pull this off but the prolific Phillips (Prague; The Egyptologist; Angelica; The Song Is You)? The narrator—a knockoff of the author himself?—relates the obsession of his father and twin sister with the Bard of Avon and the discovery within the family of a hitherto unknown play by none other than. Our narrator then recounts the tribulations of family life, centered on his dad’s frequent incarcerations for forgeries of artworks (and plays?). At length the father persuades his son the narrator to sell the play, and it is bought by—you guessed it—with the understanding that the narrator would pen an introduction to contextualize the play, the “introduction” becoming the memoir that is considerably longer than the play. This drama, The Tragedy of Arthur, is presented in full herewith, duly annotated by both the narrator and an academic. The Bard would be amused to be set center-stage by someone who professes to have no patience with him, while the narrator pokes wicked fun at the ubiquitous memoir genre.

Highly recommended for all who enjoy inspired, original, entertaining writing—deftly delivered here by one of our most talented arthurs, uh, authors. [An LJ Editors’ Pick]
— Edward Cone, New York

Booklist – February 1, 2011
The always-original Phillips has outdone himself in this clever literary romp. Successfully blending and bending genres, he positions himself as a character in a novel that skewers Shakespearean scholarship, the publishing industry, and his own life to rollicking effect. Poised on the brink of literary history, Random House is about to publish a recently discovered Shakespearean play that had languished for centuries until unearthed by Phillips’ own father, also named Arthur Phillips. As literary executor of his father’s estate, the younger Arthur is invited to provide a “brief” introduction to this masterpiece, detailing the often questioned provenance of the play and his own eccentrically dysfunctional family in the process. Oh, by the way, the play, complete with scholarly notes, is also appended. Who wrote the play? Was it Arthur Phillips or William Shakespeare? How much truth does an author actually reveal in a fictional memoir? How low will a publishing company sink in pursuit of a literary coup? Does a play within a novel ever make sense? For the answers to these and other burning questions, you simply must read the book.
High-Demand Backstory: Phillips, who has been on everyone’s radar since the publication of Prague (2007), continues to intrigue and amaze.
— Margaret Flanagan

Reviews from the UK press

Literary Review
‘It is a masterful piece of mimicry, and a brilliant exploration of influence, authenticity and authorship. Arthur has managed a rare thing: he’s found something new to say about Shakespeare. And for that alone this book deserves an audience.’

Daily Mail
‘The whole thing is deliciously playful, a cunning comment on fiction and fraud, and literary reputation and speculation… a tricksy, engaging conceit of a novel ‘

The Independent
‘In terms of sheer audaciousness there will have been few novels this year to match The Tragedy of Arthur… An enjoyable pastiche, with some intriguing experiments…a triumph of humility, and a worthy offering.’
— Jonathan Gibbs,

London Review of Books
‘Nails get hit smartly on the head.’

Literary Review
‘Dense with allusions, puns and psychological observations, this tricksy, multilayered piece of writing superbly offers up a number of interpretations, each as thought-provoking as the last… A scintillating literary puzzle.’

The Guardian
‘A tragic-comic novel with an appealing protagonist.’

New Statesman
‘Intelligent and insightful and has an almost uncanny ear for how Shakespeare sounds.’ 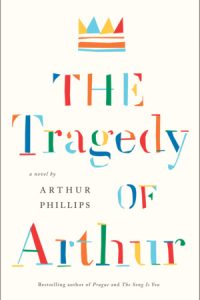