Booklist – January 1, 2009
“Owens more than meets expectations, with every page filled with humor, short stories, notes on cultural peculiarities (like gopher turtles), not to mention 150 recipes divided into four seasons and 20 intermingling menus. …delivered with a great ear for dialogue and a terrific sense of timing… A keepsake.”

Publishers Weekly – December 1, 2008
Owens (My Brother Michael), who proudly calls herself a “Florida Cracker,” turns a derogatory term into a loving, humorous label for her people, at the same time inviting non-crackers to hear from and be fed by them as they usually cannot. Like an afternoon on a Southern porch, this book is filled with family stories and local legends delivered between mouthfuls of down-home cooking. Owens groups the recipes into 20 seasonal menus, including impress-your-rivals spring baby shower desserts, cold potato soup and fried catfish for summer, hearty fall tailgating fare and stick-to-the-ribs winter meals. She prefaces each menu and most recipes with lengthy, hilarious descriptions of the food and its cracker history, from the field peas her sister loves so much she refused to date anyone who didn’t eat them to the stewed squirrels of her dad’s childhood and her grandmother’s chocolate gravy. Few of the recipes are very challenging if one commits to using all the butter or bacon drippings called for, but Owens does give shortcuts for “lazy Crackers,” as well as some lighter recipes for diet-minded “Metro Crackers.” But though some of the dishes may get onto the tables of crackers who didn’t grow up eating proper ham with red-eye gravy, or even onto some non-cracker tables, this book is even better to curl up with and read cover to cover, meeting Owens’s friends and family and basking in her comical, evocative storytelling. (Feb.) 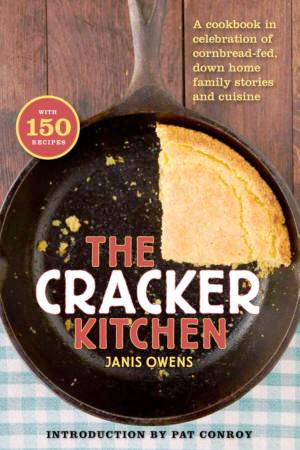