Janis Owens is a novelist, memoirist, folklorist and premier storyteller. She is a native of West Florida, born in Marianna, the last child and only daughter of an Assembly of God preacher who later became a salesman for the Independent Life Insurance Company. As a child, her family lived briefly in Louisiana and Mississippi, and then returned to North Florida, where she attended the University of Florida, majoring in English and securing a place in Harry Crews’ fabled Creative Writing Workshop. She earned a bachelor’s degree in English with a minor in Southern history, and is the award-winning author of three novels: MY BROTHER MICHAEL, winner of the Chautauqua South Fiction Award for Best Novel, MYRA SIMS, and THE SCHOOLING OF CLAYBIRD CATTS. Her essays and book reviews have appeared in the New York Times, Writer’s Digest, the Washington Post and many other publications. Author Pat Conroy has called her, “one of the finest novelists of our time.”

In 2009 she wrote her only memoir in the form of a cookbook: THE CRACKER KITCHEN: A Cookbook in Celebration of Cornbread-Fed, Down-Home Family Stories and Cuisine. Part-cookbook, part-family memoir, CRACKER KITCHEN celebrates the backwoods resilience of a much maligned section of Southern culture: the hapless, toothless Cracker. Janis traces the roots of the word back to its origins and offers a refreshing anthropological exploration of this group of proud, fiercely independent Americans who have a deep love of their families, country, stories and food. Intertwined with their history is the history of her own beloved Cracker family: Grannie, Granddaddy, Uncles and Cousins-in-law, complete with pictures from her family album and many a hilarious family story.

Her latest novel, AMERICAN GHOST, explores a number of themes, including racial and cultural identity, and the power of our collective past to influence our present. The novel won several awards, including the Silver Metal at the Florida State book awards.

Janis is married and has three daughters and four grandchildren. She lives in Denver, Colorado and on the family homestead in rural North Florida with her husband Wendel. She is working on her fifth novel, also set in North Florida. 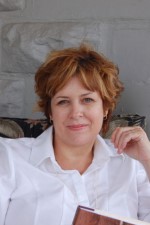