Mobile Register – September 22, 2002
“Cassandra King has crafted an enchanting portrait of the South, its surroundings and sensibilities… This Alabama daughter’s unique voice magically draws the reader into her characters and stories. Anyone who has entered the exotic world of powerful storytellers like Anne River Siddons and Sena Jeter Naslund will likely discover an affinity for Cassandra King’s style of clear and polished prose. This blockbuster book clearly establishes King as a powerful fiction writer.”
— Elizabeth A. Doehring

Boston Globe – September 15, 2002
“Engaging… sharp, observant, thoughtful… The Sunday Wife by Cassandra King is an intelligent, witty novel, skillfully written. Dean Lynch’s voice is self-effacing, with an inner strength that captures the reader’s sympathy straightaway… The Sunday Wife has some very funny scenes… Dean draws closer to Augusta and her family, and discovers a disturbing secret about her friend’s past, one that bears on Ben’s ambitions. To say more would be unfair to those who may read this excellent novel.”
— Diane White

People Magazine – September 2002
“A delight… King keeps the pace surprisingly fast moving with a style full of tension and quiet dread, as if terrible events wait to spring off the next page… Dean’s paralyzing insecurity will resonate with anyone who has struggle for acceptance. As slice-of-life stories go, this is an extraordinary generous one: rich, dense and satisfying. Bottom Line: Sunday best.
— Debby Waldman

Birmingham News – September 8, 2002
“In her insightful second book, The Sunday Wife, Cassandra King explores the unconventional spiritual awakening of Dean Lynch… She also explores the nature of love – the destructive power of addictive love, the healing power of mature, mutual love and the blind worship of an adoring congregation. And she deftly examines class differences and snobberies, predicated on family name and wealth, in a small, southern town… Dean… redefines her life despite the constricting social circumstances; however, unlike many previous female heroines, Dean has a far happier fate.”
— Lanier Scott Isom

BookPage – September 2002
“The Sunday Wife…is one of those books that keep you up till three in the morning and make you wake up three hours later to pick up where you left off… King, the wife of novelist Pat Conroy, is a graceful writer, and her description of people, places and things range from delicate to deadly; the seafood meals depicted in this book made this reviewer go out and buy oysters for bisque, and the scenes of beaches in moonlight and sunlight are achingly beautiful. King also excels at keeping the plot cooking, page after page. The Sunday Wife is a tasty and irresistible treat.”
— Arlene McKanic

Southern Scribe – August 26, 2002
“Cassandra King’s The Sunday Wife is a pleasure. In the tradition of Fannie Flagg and Lois Battles, the author has written a memorable novel about the intrigues of small town life in the deep south… Dean and Augusta become the best friends neither has ever had. Like matches and gasoline, the combination is combustible… The Sunday Wife is a charming account of one woman’s journey away from society’s expectations.”
— Pam Kingsbury

Library Journal – August 2002
“Told in the first person and heavy on Southern atmosphere, this novel is peppered with Dean’s wry observations. All aspects of institutional religious hypocrisy, intolerance, ultraconservatism, and general self-righteousness are fair game as Dean discovers who she really is. King, who is married to novelist Pat Conroy, has proven herself to be an extraordinary author in her own right. Fans of Patricia Gaffney and Marjorie Kinnan Rawlings will enjoy this extremely well written book. Essential for libraries of all sizes.”
— Shelley Mosley

Publishers Weekly – July 15, 2002
“Finely drawn characters and complicated social intrigue make King’s second novel a charming read… King’s secondary cast, which includes a sympathetic psychic and the magnetic but sinister former preacher at Ben’s church, is a captivating bunch. King has written a truly heartwarming story, a tale of turbulent emotions and the vagaries of public opinion in a small Southern town; she has a sure winner here.”

Booklist – July 2002
“Dean and her husband, the Reverend Ben Lynch, have arrived in Crystal Springs, Florida. Dean is hesitant, feeling her low-class roots more than ever… until she meets Augusta Holderfield, a vivacious character who could have stepped straight out of a Truman Capote novel… Dean and Augusta become true friends as Augusta admires Dean for her musical abilities and encourages her to free herself from her church-wife existence and explore her own desires… King, author Pat Conroy’s wife, captures the redolence of the South and the trickiness of Bible-belt society in an impressive debut.”
— Patty Engelmann 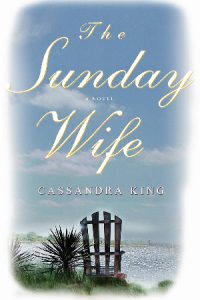