Bookpage – August 1, 2007
“This story does what all good stories should do: It takes you places—some homey and warm, and others where you’d rather not go. The central characters are the Mickelson women, sympathetic, troubled and beautiful. The men are aloof, roiling with unclaimed emotion and needs. [Baker’s] debut is as much a look at wifery and creating a home life as it is a family saga… She does a skillful job of painting a picture of early 20th-century society, blending it with an intricate look at a single family’s experience to create a compelling drama that is full of love, conflict, loss and life.”
— Linda White

Chicago Tribune – July 28, 2007
“Baker is adept at pacing… making effective use of multiple story lines to achieve ultimate suspense for the reader. The novel carries us along under the power of vivid prose and complex family history, inviting us to imagine men and women fashioning new lives in the context of war, rigid moral codes and the consequences of their own choices regarding personal relationships. “Keeping the House” is an achievement of plot and character, introducing Ellen Baker as an author who knows how to keep us turning the pages.”
— Jessica Treadway

The Buffalo News – July 15, 2007
“Here comes [a] lovely book – a long, complex, heartbreaking literary novel… the kind that make you rush through the dinner dishes or home from work. If you thought novelist Michael Cunningham crafted a fine example of 1950s womanhood in the persona of housewife Laura Brown in “The Hours,” then you will definitely want to check out Baker’s book for the character of Dolly Magnuson alone. Baker surpasses Cunningham… in her detailed and accurate depiction of the daily life of an American wife of the post-World War II period. Do yourself a major favor at the bookstore this summer: Pick up Ellen Baker’s “Keeping the House” and start reading. Don’t be surprised if you can’t put it down. For hot summer nights, American fiction just doesn’t get any better than this.”
— Charity Vogel

The Stanford Daily – July 12, 2007
“I can’t deny that Ellen Baker’s debut novel “Keeping the House” may appear long and baffling if you judge it by page numbers alone. But I encourage you to curb that instinct and take a crack at “Keeping the House” this summer. I remember thinking to myself about two thirds of the way through the book that I could get lost in the lives of the characters forever. Not only is the plot fascinating, but Baker’s use of language captivated me as well. It’s a fun and fast read, and maybe, like Dolly, you can use it to escape the realities of your own life for a while.”
— Emma Trotter

Booklist – May 2, 2007
“Brimming with luscious details that authenticate the story’s various time periods, from early to mid-twentieth century, Baker’s accomplished, ambitious debut novel is a majestic, vibrant multigenerational saga in the finest tradition of the genre. As a new bride in a new town, Dolly Magnuson is consumed with trying to be the perfect wife… and with trying to obtain the perfect house, the abandoned Mickelson mansion, a crumbling Victorian that has captured her fancy to the point of obsession. But when one of the Mickelson scions returns… Dolly discovers more about the family, and herself, than she ever dreamed possible.”
— Carol Haggas 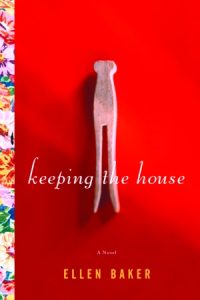