A big-hearted, sweeping twentieth-century saga about the strength of women’s friendships, by the beloved author of Keeping the House.

In 1944, Grace Anderson, Lena Maki, and Lena’s mother, Violet, are working for the war effort at the local shipyard. Grace dreams of a glamorous life in Hollywood, even as she dutifully waits for letters from Alex, her sweetheart in the Marines, and from Derrick, Lena’s twin brother. But when Alex is killed and Derrick is declared missing after his ship is sunk in the Pacific, Grace finds herself inextricably mired in the Maki family’s nightmare.

Decades later, Violet’s great-granddaughter Julia goes to the Maki farm in an effort to make sense of her own life. When long-lost Violet returns in search of a final reconciliation, Julia finally begins to piece together the tangled history and dark secrets that the farmhouse has been hiding for more than half a century, and learns that lost things can, sometimes, be found. This is an unforgettable novel about the inexorable power of women’s friendships and of their dreams.

“What a rich offering this is! Ellen Baker gives us characters who are so real, so recognizable, so likable, in spite of (or perhaps because of) their problems and secrets and frustrations and missteps…. I loved reading this powerful and poignant book, which, though it acknowledges pain, regret and remorse, ultimately is a celebration of life.” — Elizabeth Berg, author of Once Upon a Time There Was You and Open House

“Ellen Baker’s new book is a great, big, rich and romantic slice of World War II history, which chronicles the lives of three Wisconsin women left behind on the home front to carry on without the men they love. It is a loving tribute to their courage, the sacrifices they made, and their tremendous contributions to the American war effort.”
— Fannie Flagg, author of I Still Dream About You

“Ellen Baker’s novel is large in the best sense; large in its generous spirit, and its gallery of vivid, memorable characters. It possesses, as well, an abundance of intelligence, and great shrewdness in its pure, story-telling appeal. This novel has a naturalness and finesse that are truly rare.”
— Richard Ford, author of The Sportswriter and Independence Day

“Give your heart to Ellen Baker’s beautifully made new novel about stern people and the stern toll of urgent words never said. From the hard-bitten bluffs of Lake Superior to the coast of California, from World War II to the present day, the mothers and daughters of two Midwestern families of immigrant stock race against time and history to break down a wall of lies, before it is too late.”
— Jacquelyn Mitchard, author of The Deep End of the Ocean

“I adored this luscious novel. Its authentic details immersed me in the world of women at work during World War II, but the layered story immersed me even deeper in the secrets that get buried in generations of family history. I loved Baker’s debut novel, Keeping the House, and loved this one even more.”
— Katrina Kittle, author of The Kindness of Strangers and The Blessings of the Animals

“Ellen Baker is a brilliant writer and I Gave My Heart to Know This is a marvelous novel. Moving between past and present, Baker weaves her themes of secrecy, betrayal, and forgiveness into a powerful, unforgettable story. I loved the characters so completely I began to think of them as my own family and friends.”
— Bev Marshall, author of Walking Through Shadows 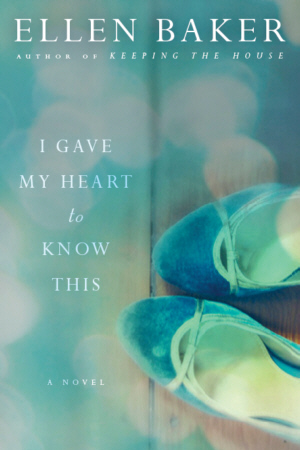