The Baltimore Sun – April 6, 2008
“This is an utterly beautiful book. Hampl is a poet, and her prose is rich and dense with image and meaning, the way poetry can be… Hampl, winner of the Mac- Arthur “genius” grant, confirming her mother’s ambitions for her, has written four previous memoirs, and she is still trying to figure out how her life happened to her, all the accommodations, all the compromises… With meticulous observation and focused description, she examines her parents’ marriage and their influence in her life as that life changes forever.”
— Susan Reimer

Chicago Tribune – October 27, 2007
“The second of two children born to a Czech florist and his Irish wife and raised in St. Paul, Hampl grew up looking for escape, circling right back round to home. Her most exquisite new memoir, The Florist’s Daughter… is neither a settling of accounts nor a deification. Hampl isn’t searching for heroes… She’s listening for echoes, affixing shadows, taking a tour of her memory again, the photos, again, the stories she’d been told, again, and also the lies that she was fed and that she harbored. She’s testing the limits of understanding. Poetic and thrilling… [the memoir] also yields some of the most glorious sentences and narrative framing you will find anywhere. Hampl’s childhood may have been ordinary by the standards of James Frey or Lauren Slater, but her talents as a writer render it far more meaningful, and resonant.” – Beth Kephart

Christian Science Monitor – October 16, 2007
“In today’s relentlessly tell-all world, a reader could be forgiven for asking if we really need another cinéma-vérité rendition of a writer’s childhood. Well, in this case, yes – simply because Hampl does it so well. Hampl [lays] bare the tenderness, humor, pathos, and ultimate worth found in these unassuming Midwestern lives, spent meekly assuming that everything truly important was happening elsewhere. Hampl is a memoirist by trade. She takes a clear-eyed look at the ordinary folk around her and the myths by which they live and, without failing to acknowledge the imperfections, also finds honor and value.” – Marjorie Kehe

The Plain Dealer (Cleveland) – October 14, 2007
“In The Florist’s Daughter, Hampl stays home, lavishing her considerable attention on St. Paul, Minn. Hampl is interested less in the chronology of her growing-up years in the mid-20th century than in those particular moments that have shaped her as an adult. Both tender and cleareyed… she invites our re-evaluation of experience that relies on something subtler than scope. So rather than assembling ultimate tidy meanings, Hampl fills this memoir with the pleasure of a human body in the world, sensual and observant. The past is examined, savored, but never quite put away.” – Susan Grimm

People (Four Star Review) – October 8, 2007
“In this addictive account of her disloyal ‘Midwestern girlhood’ and role as the only daughter of parents who embraced ‘the sweet safe middle,’ Hampl observes that ‘nothing is harder to grasp than a relentlessly modest life.’ Yet in a quietly stunning narrative that opens at her mother’s deathbed, the author… offers up profound truths about the way her parents shaped her sensibilities. Realizing that what she craves is a kind of extravagance, a worldliness from which her mother and father tried to shelter her, Hampl creates indelible portraits of these shortsighted, loving people.” – Michelle Green

New York Times Sunday Book Review – October 7, 2007
“The Florist’s Daughter” is Hampl’s finest, most powerful book yet… Her signature literary triangulations — the author analyzing herself as she explicates the world through artists she worships — dissolve in the emotional immediacy of her subject. The result is electric and alive, containing a fire her mother would surely recognize and a beauty her father would approve. Like all of her work, this book demonstrates that life is much bigger than it appears. One only has to look long enough. In the end, Hampl’s honest examination of her own life makes “The Florist’s Daughter” a wonder of a memoir.” – Danielle Trussoni

Entertainment Weekly – October 5, 2007
“In her lovely, elliptical memoir of family and loss, Hampl brings her late mother and father back to life then gently lays them to rest again. ‘Nothing is harder to grasp than the relentlessly modest life,’ she writes. Then she does just that, conjuring not just her parents’ modesty but everything that was extraordinary and mysterious about them, from her astringent mother’s sense of adventure to the late-in-life revelations of her mild-mannered father, a St. Paul florist who brought ‘an aura of quiet, to the flowers he arranged.’ This beautiful bouquet of a book commemorates both.” – Jennifer Reese

Los Angeles Times – October 2, 2007
“Patricia Hampl is the queen of memoir. Now, inspired by her mother’s death, she has written a memoir about her parents. Hampl worries, as she has in the past, about being too good, too predictable; living just blocks from where she grew up, taking care of her aging parents, being trapped in their expectations of her… Memoir, it turns out, is her vehicle for escape. Do the pieces Hampl gives us fit together to form a whole person? Yes! When will it end? Hopefully, never.” – Susan Salter Reynolds

Chicago Tribune – September 30, 2007
“The word ‘memoir’ has fallen on hard times. It sounds sloppy and self-indulgent. If anyone can restore the memoir to glory, it’s Patricia Hampl. She has been writing superb first-person books and essays that explore her inner and outer life, with beauty and precision. The St. Paul resident never falls into self-pity. Her latest book, The Florist’s Daughter, is ostensibly about her mother’s final days, but it tells the history of a Midwestern family. Read Hampl, and you’ll forget about Frey.” – Julia Keller

Star Tribune – September 28, 2007
“Patricia Hampl has written a… thoughtful and ardent tribute to a normal childhood… Her style moves easily from the high lyricism of wonder and delight to the unfooled coolness of irony and skepticism. What gives her writing such intensity is her belief that ‘Only poems and music … could express the real things, which were the unsayable things.’ She is practicing a metaphysics of language. I can only admire her passionate attempts to parse reality — as if she were attending closely to a text, pressing the juice out of every sentence and paragraph and translating it into her own luminous words.” – Brigitte Frase

Newsday – September 30, 2007 Sunday
After the publication of “A Romantic Education”… Patricia Hampl was widely hailed in literary circles with having revived the memoir as a genre. The strongest evidence to date is her new book of remembrance, The Florist’s Daughter… Many books have been built with similar scaffolding. But Hampl is that rare writer who refuses to sentimentalize even those she loves most. The tensions in this novelistic masterpiece gather stitch by stitch, one ordinary but riveting anecdote after another, interwoven with dry comedy. [Hampl’s] charm remains potent along this shimmering river of memory.” – John Habich

Publishers Weekly (Starred Review) – July 9, 2007
“Hampl begins her very personal memoir with one hand clutching her dying mother Mary’s hand, the other composing an obituary on a yellow tablet—an apt sendoff for an avid reader of biographies. The memoir begins with the question of why, in spite of her black-sheep, wanderlust-hippie sensibilities, Hampl never left her hometown of St. Paul, Minn. In the end, the reason is clear. With her enchanting prose and transcendent vision, she is indeed a florist’s daughter—a purveyor of beauty—as well as a careful, tablet-wielding investigator, ever contemplative, measured and patient in her charge.”

Kirkus (Starred Review) – July 1, 2007
“Hampl has crafted an honest and loving tribute to her parents, who raised her in St. Paul, Minn., where she has remained virtually her entire life. Hampl says, ‘Nothing is harder to grasp than a relentlessly modest life.’ Her writings about that life highlight difficult truths about both the ‘author and her parents. Death is the principal character, and Hampl shows us powerfully that Death touches not only the dying. A memoir for memoirists to admire—with language that pierces.” 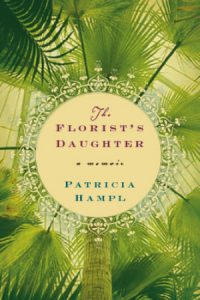