The Art of the Wasted Day

NPR Fresh Air – April 23, 2018
Imagine a book that celebrates daydreaming, that sees it not as a moral failing, but as an activity to be valued as an end in itself… The way Hampl writes about it is pretty memorable, too. In fact, it’s a knockout… it’s impossible to do justice to the cumulative power of Hampl’s dream-weaver writing style by just quoting a few lines. You have to go on the whole voyage with her, take the detours, be willing to let yourself get becalmed in thought. The payoff — because, of course, we’re all still looking for a payoff — is that by wasting some of your time with Hampl, you’ll understand more of what makes life worth living.

Star Tribune (Mpls) – April 15, 2018
“A wise and beautiful ode to the imagination …But as with any memoir, the main character is Hampl herself. As always, she is on a journey to understand herself, and in doing so, to help us learn how to discover what is most precious and enduring in our own lives. It is an honor to encounter her anew, and to have her gently remind us that sometimes it’s wise to put down our to-do lists and to give ourselves over to musing out the window, to remembering that “the imagination is the crucible of freedom.”

Wall Street Journal – April 15, 2018
“Life, if you’re lucky, is divided into thirds: youth, middle age and “you look good.” For Patricia Hampl, this quip of her father’s feels freshly relevant now that, as she acknowledges, most of her life is behind her…
This book is most moving when Ms. Hampl is describing her newfound disorientation as a widow. She wonders, for example, “Why is it still so hard to enter a restaurant on my own… as if eating alone were faintly reprehensible?” She does not dwell on this loss; she’s not that kind of memoirist. Yet her husband’s presence, and absence, is felt throughout. For this reason, Montaigne’s lessons about life feel all the more valuable: He seemed to suggest the point of it all is not achievement or even love, but finding order and tranquility in one’s days. This, Ms. Hampl recognizes, is something she can pursue on her own.”

Booklist Starred Review – March 1, 2018
“Memoirist extraordinaire Hampl (The Florist’s Daughter, 2007), a master of judiciously elegant vignettes…”…  For all the vital, sensuous, enrapturing descriptions that engender a powerful sense of presence, this is also a contemplation of absence and solitude as Hampl tenderly contends with the sudden death of her husband. An exquisite anatomy of mind and an incandescent reflection on nature, being, and rapture.”

Kirkus Review – Starred February 1, 2018
A writer’s life is conveyed through “a lens of penetrating inquiry.” As a young girl studying the Baltimore Catechism to prepare for her first confession, Hampl (The Florist’s Daughter, 2007, etc.) was shocked to learn that daydreaming—”this effortless flight of the mind”—was a sin. She refused to believe it: daydreaming, her abiding pleasure, “sees things. Claims things, twirls them around, takes a good look,” and makes sense of them. In this lucent, tender, and wise memoir, the author celebrates this quiet reflection, which actually requires acute observation and intense, even loving, attention. “Caress the detail, the divine detail,” Nabokov commanded. “And because the detail is divine,” Hampl discovers, “if you caress it into life, the world lost or ignored, the world ruined or devalued, comes to life.” As in her previous memoirs, the author reports on journeys, both inward among memories and outward—to France, Wales, and on the Mississippi River—as she works at “the job of being human.” She is never really alone, “even though being alone is the one thing we recognize as our chance for authenticity, for surprising ourselves out of predictability.” Her traveling companions include Whitman, Dickinson, Augustine, Gregor Mendel, Colette, Virginia Woolf, and, notably, Montaigne, the elegant 16th-century writer who withdrew from public life “to muse about how to die—or was it how to live?” Montaigne invented a new literary genre, the essay, liberating writing “to be wild, untamed, eccentric.” His goal, Hampl writes, “was to renew the springs of the first-person voice bounding across the field of what we keep calling, against our uncertainty, reality.” His goal is Hampl’s, as well: memoir, she knows, is “not a reminiscence, but a quest.” Although reveling in solitude, the author is no stranger to loneliness; her husband’s recent, unexpected death has left her bereft. Grief pulses through the memoir, a feeling different, entirely, from “the solitude within the mind.” “Loneliness eats away at you,” writes the author. “Solitude fills and fills you.” A captivating and revelatory memoir.

Publishers Weekly – Starred Review – January 15, 2018
Novelist Hampl (The Florist’s Daughter) offers a wonderfully lavish and leisurely exploration of the art of daydreaming. As an eight-year-old child in a Catholic household, Hampl learned that daydreaming was considered to be one of the “occasions of sin” in the Baltimore Catechism. She made her decision then: “For this a person goes to hell. Okay then.” Decades later, retired and widowed, she commits herself to the task of wasting her life “in order to find it.” Here, Hampl reveals her true purpose: to write a book for baby boomers who “are approaching the other side.” Hampl leads by example. She visits the home of Sarah Ponsonby and Lady Eleanor Butler, two women who discovered that “the act of leaving the world’s stage” could be the “best way to attain balance and… integrity.” Hampl enjoys leisurely meals in south Moravia where she ponders the patient monastic life of Gregor Mendel. Later, she visits Michel de Montaigne’s tower in southwest France. As Hampl rumates and escapes, her late husband is palpably present. Hampl captures art of day dreaming with astonishing simplicity and clarity in this remarkable and touching book. (Apr.) 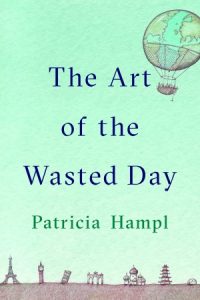