Star-Telegram – Tuesday, May 15, 2007
“In his new book, No, [David Walsh] offers up a host of compelling reasons to change our parenting styles, and lots of practical tips for doing so. Walsh sees an epidemic of what he terms DDD — discipline-deficit disorder. Discipline is an age-old challenge. But Walsh says it is particularly difficult for this generation of parents, because we live in a ‘Yes’ culture, bombarded by ads that convince us we need more, and we need it now. The good news is that more parents are waking up to the problem. Walsh offers a guide to where to start.” – Lisa Davis

Minneapolis Star Tribune – February 1, 2007
“There’s a childhood epidemic sweeping Minnesota and the nation. Dr. David Walsh… calls it discipline deficit disorder: DDD. In his new book, No, Walsh emphasizes that DDD… springs from a persistent lack of a single word in young people’s lives. That word is “no.” But without rules and limits, kids become self-absorbed, disrespectful and unable to delay gratification, says Walsh. Too often, it seems, we are willing accomplices in DDD’s rapid spread.”

New York Post – January 9, 2007
“In his book No: Why Kids – of All Ages – Need to Hear It and Ways Parents Can Say It, out today, Walsh spells out the perils of permissiveness (flagging test scores, diminished global competitiveness, rampaging rudeness) and makes a powerful case for the pros of saying nay.
By saying no when you need to, he argues, you’re helping children develop self-discipline, self-respect, integrity and to learn how to delay gratification and other traits they need to succeed.” – Barbara Hoffman

Publishers Weekly – November 13, 2006
“Psychologist Walsh, president and founder of the National Institute on Media and the Family, tackles a tough subject in this book on how parents can say ‘no’ to their kids and why they should. Walsh’s approach fosters such qualities as perseverance, patience and commitment, emphasizing a balanced parenting style that is neither predominantly negative nor permissive.
Peppered with anecdotes of other parents’ struggles as well as examples from raising his own three kids, Walsh’s reassuring voice will give parents the courage to just say ‘No’ -and mean it.” 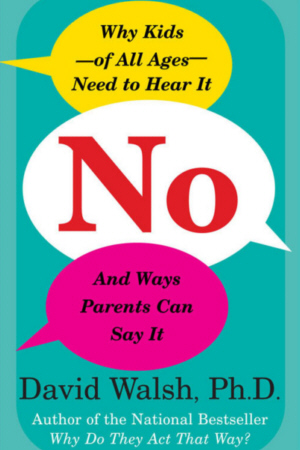