To readers accustomed to his extravagantly emotional novels of family conflict, much of them mined from his own history, Pat Conroy’s newest book is an unexpected detour. There are no tortured characters in THE PAT CONROY COOKBOOK: RECIPES OF MY LIFE (Doubleday, $26), which he wrote with Suzanne Williamson Pollak. And there is little chance of a film being made of his culinary obsessions unless Barbra Streisand and Nick Nolte, who starred in the screen version of his novel “The Prince of Tides,” have been hankering to make Pot Likker Soup (balm to a Southerner’s nerves, Mr. Conroy writes). The book is a chronicle of his passion for cooking — he won a 2001 James Beard Foundation award for an article in Gourmet magazine about an oyster roast — but there are autobiographical chapters that have little to do with sole en papillote or squash blossoms.

Q. It is nonetheless part memoir.
A. No question. But when I was a young man, I read the autobiography of a writer that I liked a lot, and it was the most boring book I’d ever read. So it’s best to avoid that kind of book, so this is my disguised autobiography.

Q. Would you rather cook or be cooked for?
A. I would rather cook. Here’s the joy of cooking, which I didn’t know in my entire childhood: there is a joy of feeding, one of the greatest joys in the Western or the Eastern world. Someone comes into your house; it’s part of hospitality, part of being a good friend. We had 30 people here for Thanksgiving. My wife and I are the only ones who cook, except for her son, Jason, and we made everything — hors d’oeuvres to dessert. We made fried turkey and roast turkey.

Q. Is it a disappointment that you spend five or six hours cooking a turkey and everybody’s finished with it in 15 minutes?
A. The sated feeling of people with full stomachs is a great feeling.

Q. Do recipes come at you the way stories do?
A. Yeah, and theft is a great thing. You can’t patent a recipe. Suzanne is the one with boxes full of recipes, and I’m one of those people with scratched-on cookbooks with stolen recipes. I will steal anything I get a chance to.

Q. Your recipe commentaries are full of sensual food memories.
A. I never enjoyed writing anything more. All I did was remember how I was introduced to all these recipes, whether through my Italian roommates from college, or my Orlando aunt with her coconut cake.

Q. The first cookbook you bought 35 years ago was Auguste Escoffier’s 19th-century classic. Is it still an inspiration?
A. I used it this Thanksgiving. He is simply fabulous, the best. My friend Anne Rivers Siddons cooked creamed pearl onions and I looked it up in Escoffier’s, and hers measured up. It was the way her mother taught her.

Q. You’re a serial cookbook buyer who reads them on airplanes and on the beach.
A. I’d say I have 250 cookbooks. If I were serious, I’d have 250 more. But when you divorce, the ex-wives latch onto the cookbooks. I didn’t know that’s one of the losses you incur.

Q. Have you ever thought that you could be a pretty good chef at a restaurant?
A. I’ve had dreams of that once or twice, but I know chefs in great restaurants, and it’s the hardest work. To me, it would be a disaster.

Q. Of tartar sauce, you write, “Tartar sauce can lift a simple fried catfish to the realms of ecstasy, turn a fried oyster into an emperor’s feast.” Do you know if you’re the first cookbook author to write an ode to tartar sauce?
A. If I am, I should not be.

Q. People familiar with your novels might be surprised to learn that through your cooking for him in his final months, you and your father, the model for the sadistic father in “The Great Santini,” reached emotional détente.
A. Feeding Dad in his last year, my one regret is he asked for veal kidneys and I couldn’t find them in South Carolina. There were signs of détente going on in the last few books and signs throughout his life.
About the authors

Pat Conroy is the bestselling author of The Water Is Wide, The Great Santini, The Lords of Discipline, The Prince of Tides, Beach Music, and My Losing Season.

Suzanne Williamson Pollak, the author of Entertaining for Dummies, was the spokesperson for Federated Department Stores on the subject of cooking and home entertaining. 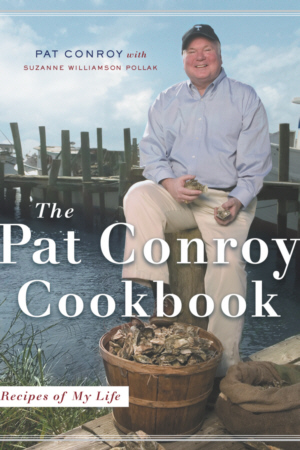 Reviews
New York Times Interview
The Story Behind the Book