Pat Conroy uses stories to explore the great themes of life. His honesty and his remarkable command of the language of the heart have won him devoted readers around the world.

Here,  in his own words, Pat tells us why he writes…

“From the very beginning, I wrote to explain my own life to myself, and I invited readers who chose to make the journey with me to join me on the high wire. I do not record the world exactly as it comes to me but transform it by making it pass through a prism of fabulous stories I have collected on the way.”
— From Why I Write: Thoughts on the Craft of Fiction

“I wanted to become the seeker, the aroused and passionate explorer, and it was better going at it knowing nothing at all, always choosing the unmarked bottle, always choosing your own unproven method, armed with nothing but faith and a belief in astonishment.”
— From The Lords of Discipline

Pat Conroy died on March 4, 2016 of pancreatic cancer in his lowcountry home surrounded by family and friends. He was 70 years old. His legacy survives in his books and in Beaufort, SC at The Pat Conroy Literary Center where his love of story, his love of teaching and his courage as a writer and enthusiastic supporter of other writers lives on.

2000 The Citadel
1997 University of South Carolina 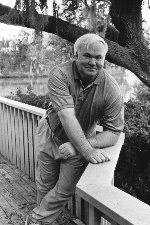