The questions that follow are intended to enhance your group’s reading and discussion of MOONRISE by Cassandra King.

I like to think that we as writers don’t find stories, they find us. I didn’t really set out to write homage to Rebecca; instead, it happened in a serendipitous way, as these things often do. I was spending a summer in a dark old house in Highlands, working on a book set there, and beginning to flesh out the different characters and story lines.

One day, I made an interesting discovery hidden away in the garden of the house I’d rented. Exploring, I found the final resting place of the previous owner’s wife. As we writers are apt to do, I became intrigued by the lonely yet lovely site, and was drawn to it again and again. And I’ll confess, my imagination came into play as I wondered about the woman who had once walked those garden paths and now rested in a secluded spot that must have been beloved by her. By sheer coincidence (or maybe not!), among my stack of books for summer reading was an old copy of Rebecca. When I’m working on a book, I relax at the end of a long day of writing by watching old movies or re-reading books I’ve loved in the past. I’ve found it’s the only way to keep myself on track; the last thing I need is to get engrossed in a new thriller or bestseller that I can’t put down. Only when I returned to the familiar pages of Rebecca did I see the connection to my newfound fascination with the previous wife of the house and du Maurier’s unnamed narrator. By chance, I’d found a new approach to my Highlands book.

If I had set out to write a retelling of Rebecca, I’m sure the difficulties would have been numerous. Certainly, creating a believable modern woman to play du Maurier’s shy, overly-intimidated narrator would have been major. But one of the things I love about Rebecca is the way that same woman comes into her own by the end of the book. Having Helen, the counterpart in my book, be so intimidated by her predecessor without coming across as a wimp was a challenge, but one that I enjoyed struggling with. It always comes as a surprise to me when my characters take on a life of their own, and this time was no exception.

Yes, writing Moonrise gave me a new appreciation for the mastery of du Maurier’s craft in writing Rebecca. The suspense is perfectly timed, and the characters are unforgettable, even the minor ones. I look forward to the next time I sit down to read one of my all-time favorites, Rebecca, yet again. CK

1. MOONRISE was inspired by the author’s lifelong love of Rebecca, Daphne du Maurier’s classic gothic novel, reminding us that the novels we admire in our youths resonate throughout our lives. What other novels come to mind that were based on or simply inspired by other classics? Are there novels you read years ago that made an impression on you and that you’ve never forgotten?

2. The Victorian house and gardens once cherished by Emmet’s deceased wife Rosalyn are very much their own characters in this novel. Do you feel that houses and gardens somehow contain the spirits of the past owners or occupants? Have you ever lived in a haunted house yourself? How did you know it was inhabited by spirits?

3. The author believes as much research often goes into writing a good novel as a work of nonfiction. Do you agree or disagree? Have you ever tried your hand at writing a novel? Would you like to? What would you write about?

4. What special challenges come with writing a novel from multiple points of view? MOONRISE has three narrators: Helen, Emmet’s second wife; Tansy, the Atlanta beauty and socialite; and Willa, the local woman who is the caretaker for these summer homes. The author believes that elements of writers’ personalities must exist in the characters they create or else they will never be believable. Did you find any one of these women more or less believable than the others?

5. MOONRISE distinguishes itself from King’s previous work by offering more fully developed male characters. Even though all the narrators are women, did you feel that she succeeded in making the men come alive on the page? Do you think that raising three sons might have made King understand the male psyche more deeply than if she had she raised daughters? Or is having brothers, fathers, husbands, or male friends enough to bring a deep understanding of the opposite sex?

6. The group of friends reject Helen partly because they feel Emmet did not wait long enough before remarrying. How long is long enough to wait after the death of a spouse? Does a remarriage soon after a death of a spouse always reflect negatively on the quality of the marriage that preceded it?

7. What did you think of Noel and Tansy’s relationship in the book? Do you think it’s possible for men and women to be friends in the long run if they haven’t worked out any potential feelings they might have for one another? And even if the feelings are technically “worked out,” do you think a friendship like Noel and Tansy’s is possible?

8. The relationships between women in MOONRISE have been compared to those created by Margaret Atwood in her novels, Cat’s Eye and The Robber Bride. All three novels explore the complex depths, both beautiful and treacherous, of women’s friendships. How do your own relationships compare? Can women be friends without the complicated undercurrents, however temporary, of jealousy, disappointment, or disillusionment? 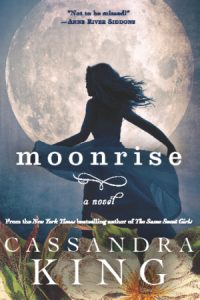