The Arizona Republic — April 12, 2007
Bookmobile by camel sets writer to work
By Sonja Haller
In the Kenyan bush near the unstable Somalia border, a box of tattered books is transported through “Phoenix-like weather” on the back of a camel.

The children of remote African settlements welcome the camel with as much wonder and glee as suburban children might an ice cream truck, said author Masha Hamilton.

But the camel bookmobile offers a sweeter long-term payoff. Books delivered to a population with an estimated 85 percent illiteracy rate has led to impoverished youth dreaming of a better life

Hamilton, an Arizona native, wrote the novel The Camel Bookmobile (2007, HarperCollins, $24.95, hardcover) and is one of more than 20 authors appearing Saturday at the Arizona Book Festival. Much of her presentation will focus on the camel bookmobile drive, which she started to improve the quality and quantity of books available. (See camelbookdrive .wordpress.com. )

Hamilton wrote about the camel bookmobile first and later visited the real hump-backed library in Kenya, where she was moved by the books’ impact on the population.

“The camel bookmobile helped the people realize there is another choice,” Hamilton said. “Maybe they didn’t think they had a choice. Now they know they do.”

One young man Hamilton met credited the camel bookmobile, which began in 1997, with his aspirations to attend college in Nairobi.

“He has a very good chance of getting there,” Hamilton said.

Question: How did the book idea come about?

Answer: I was living in Tucson at the time, and I was taking my three children to the library. I had finished my second novel by then and was open for and receptive to what I would write about next. My oldest daughter (then 13) said, “Today we read about a (camel) library in Kenya and a rule that they have that if one person doesn’t return a book it will stop coming to the entire settlement.” All of a sudden, I started to see the characters in the book.

Q: Why didn’t you visit the real camel bookmobile first and then write the novel?

A: I wanted the fiction story to have its own truth and own resonance. I wanted to allow that to really flower and come to fruition before I went there. The novel was in the final editing stages when I went. My oldest daughter (then 17) went with me.

Q: After seeing the camel bookmobile, did you change anything in the book?

A: Funny, but no. I had the opposite experience, my daughter would tell you. I would get so excited: “Oooohhhh, look,” I would say. “There is the settlement exactly as I described it.” I added a bit of color, a little of this, a little of that.

Q: Could you paint a picture of what the camel bookmobile is like?

A: Well, the guidebooks tell you not to go there. And this area has just had a period of drought and famine. There are 100-degree temperatures. The camel goes out four days a week, and the settlements might have a one-room schoolhouse, and there’s some straw huts. . . . We would go out, and here we were, these two foreigners. We got a lot of attention. But as soon as the books were laid out on the grass, the books became the thing. And it was extremely moving to see that. The books, many falling apart, are in English and Swahili.

Q: When do the camels return?

A: They try to return every two weeks. (Sometimes, Hamilton said, the settlement has moved and so have the books, which necessitates the need for a book drive.)

A: There are two main reasons. It really is the bush out there: no roads and no paths and they couldn’t traverse it unless they had a four-wheel drive, which they don’t. Also, the main librarian told me that books are unfamiliar to the people. Libraries are unfamiliar. So he wanted to use camels because at least that would be familiar. They didn’t understand the concept of checking books out. They would tell him, “We didn’t ask you to give us these books, and now you want them back?”

Q: What was the most moving thing you witnessed?

A: It was the enthusiasm they had for the books. The children would drop down, kneel down, and they waited their turn for a book and then they would start mouthing the words. They would share them with each other, saying, “Look at this.” And the librarians were also the true heroes – walking through the brush four days a week, spending hours checking the books out and walking back.

Q: What type of books are best liked and most needed?

A: Storybooks for children and fiction books for the older children are the most loved. The older ones grab up math, science and history books. The librarians said they are helped by books in biology, astronomy and the human body. 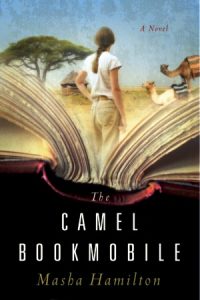