The Distance Between Us

Caddie Blair is an American journalist who has been covering the Middle East conflict for years. She knows the scent of teargas and the sound of tank fire, and has had to step over bodies to get the story. But when her lover dies beside her on the way to the next promising interview, she must reassess the violent world in which she’s become immersed. Plagued by the guilt of a survivor, she struggles to find the proper response to the killing of someone she loves. Then she meets Goronsky, himself a victim of terrorism and a believer in revenge as the moral response to evil.
Beautifully turned, and peopled with an astounding cast of characters who are as true as they are perceptive, THE DISTANCE BETWEEN US is the portrait of one woman’s search for the narrow line between vengeance and emotional survival.
“If we knew where we were going to fall,” Goronsky tells Caddie, “we could spread straw.”

A seasoned journalist herself, Masha Hamilton brings to this revealing novel the sharp eye and deep empathy that marked her debut, STAIRCASE OF A THOUSAND STEPS (BlueHen, 2001), a Booksense selection and Barnes & Noble Discover Great New Writers choice.

“What a powerful, intense, beautifully written story. Masha Hamilton takes us right into the brutal heart of the war zone, right into the guarded heart of journalist Caddie Blair. With spare and stunning prose, Hamilton reminds us that the distance between us often isn’t as great as we may think.”
— Gayle Brandeis, author of The Book of Dead Birds, winner of Barbara Kingsolver’s Bellwether Prize for Fiction in Support of a Literature of Social Change.

Bravo to Masha Hamilton. Her superb new novel, The Distance Between Us, captures the life and drama of a female war correspondent –the danger, the romance, the detachment, the intensity of the friendships and the ever-present question of what is real life and what is escape. Writing with uncommon elegance and humorous insight, Hamilton draws deftly on her own experience as a foreign correspondent to make the world of first-class news reporters come alive. 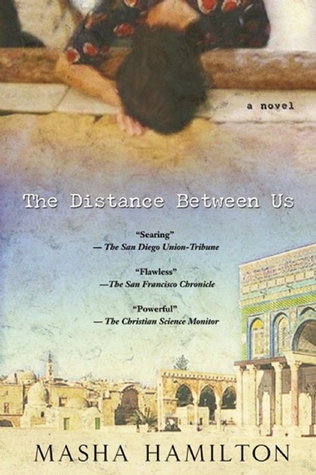