What was the inspiration for THE FOUR MS. BRADWELLS?
Like the Ms. Bradwells, I was a different person when I left law school than I had been when I arrived. This book is absolutely an ode to my law school friends and the University of Michigan Law School itself for helping me discover strengths I didn’t know I had. But it’s also an exploration of the challenges we faced as women coming into a male-dominated professional world—one that expected us to politely ride pink elevators to pink dining rooms in clubs that wouldn’t have us as members, and to turn away unwanted advances from colleagues and clients without offending anyone.

What is the significance of the title THE FOUR MS. BRADWELLS?
“The Ms. Bradwells” is a collective nickname a law professor bestows on the four main characters as they answer questions about Bradwell v. Illinois. It’s an 1873 Supreme Court opinion denying Mrs. Myra Bradwell the right to practice law because she was a woman. Justice Bradley wrote, “The natural and proper timidity and delicacy which belongs to the female sex evidently unfits it for many of the occupations of civil life. . . . The paramount destiny and mission of woman are to fulfill the noble and benign offices of wife and mother. This is the law of the Creator.” Suffice it to say my Ms. Bradwells—who are neither naturally nor properly timid, much less delicate—don’t agree.

You’ve built a strong reputation for writing about the bonds of female friendship and the complex issues women care about most (The Language of Light and The Wednesday Sisters). What draws you to stories about the dynamics of female friendship and the challenges women face?
Dipping into fictional friendships allows me to wrap myself up every morning in the spirit of my geographically-scattered real-life friends and call it “work.” The subject matter—friends helping each other through the kinds of challenges women face—is a reflection of those friendships, too. But it’s also a celebration of the women who came before me—who opened the world to me and to women of my generation—and an acknowledgement that there is still more change to be made. And a small measure of hope, I suppose, that writing about it will help move things along.

Each of the four main characters (Mia, Laney, Betts, and Ginger) has been affected by discrimination of some kind—whether for their gender, race/ethnicity. What is your message here? Have you ever been discriminated against?
I kept score for my brother’s little league team, and watched with longing a game I wasn’t allowed to play because I was a girl. I couldn’t apply to Columbia as an undergraduate because they didn’t admit women in 1977. Those things have changed, at least.

But when the head of my department at my law firm sat me down to tell me he was going to recommend a male classmate for partner over me, he didn’t disagree that I was the better lawyer; what he said was, “He has a wife and children to take care of, and you have your husband.” He wouldn’t have said he was discriminating against me. He would have said he was doing what was best for everyone in a tough economy, and he couldn’t get us both in the door. He considered us close friends. That decision he made reflects the kind of insidious discrimination I think remains deeply imbedded in our society. The group I started with at the law firm was roughly balanced between men and women, but the group that was granted partnership was not.

That’s certainly one of the things I hope readers of THE FOUR MS. BRADWELLS will become more aware of: the difference made by things as simple as the words we use and the presumptions we make, the amount of attention we pay to and judgments we make based on clothing and bodies and beauty. It’s not just men. We do it to ourselves. And gender discrimination limits men as surely as it limits women—just as all kinds of discrimination limit us all.

The novel is set in the beautiful, but isolated landscape of Cook Island? What attracted you to this setting? Is it personally significant to you?
I’d actually meant THE FOUR MS. BRADWELLS to be set primarily at the Michigan Law School before I came upon Tom Horton’s An Island Out of Time and, through it, became enchanted with Smith Island (renamed Cook Island in the novel). It’s a world untethered to the mainland, where even the way people speak, in British-leaning accents with improbable preposition choices, is unique. When I first visited Smith—after my first draft was written—I borrowed boots to wade through the bay as it lapped against the sun porch after an amazing storm, and Tom Horton was kind enough to take me on a black-night boat ride I will not soon forget. But I’m restless; there are so many places in the world I want to see. And being in a new place—particularly a place of natural beauty—somehow provides me a great emotional space from which to write.

Secrets are a central theme in this novel. What is the message here?
I suppose the thing about secrets is that we often keep them out of shame. And the things that shame us often shouldn’t. They’re often things that are not our fault—and yet they’re also often things that we will be judged for, consciously or not. Or failures that we and others can learn from if we’re willing to examine what happened. Is there a message in that? I suppose that if more of us shared our secrets we might see how common life’s challenges are. But it takes a brave person to come forward.

The book is told in alternating perspectives between the four main characters (Mia, Laney, Betts, and Ginger). What was the most challenging aspect of writing from four perspectives? Did you prefer one character over the other?
If I had to choose only one of them now, it would probably be Ginger. She’s not always the most likable, but most needs the support of friends. I’d hate to abandon her. But I have great compassion for all the Ms. Bradwells. Great love, really. It’s a funny thing, to say you love something that doesn’t really exist, but there it is.

They’re so alive and distinct in my head, but they have so much in common, too: Betts is a Michigan-trained lawyer, and Mia is a Michigan-trained lawyer, and so are Laney and Ginge. They’re all roughly the same age. They’ve all been deeply affected by the events of this one Spring Break, and by their shared friendship. They all speak in the first person, too. I think first person is more intimate, and I wanted the reader to have that close, speaking-directly-with-you feeling for each of Mia, Laney, Betts and Ginge.

You were a lawyer at a high-powered firm before becoming a published author. What made you want to become a writer? How did you make the transition?
Growing up (isn’t that where all dreams start?), I was a huge reader, but I thought writing novels meant being able to leaping tall literary buildings in single bounds. The adults I knew were businessmen—not even business women; the “ladies” were moms and teachers and nuns. Even a girl going to law school was a stretch, but less of one. It wasn’t my dream, but it was something I thought I could do. My husband, Mac, was the first adult to whom I admitted my childhood aspirations to write, and he gave me a great big push. He said, basically, “Your dream, Meg. How will you ever know if you can do it unless you try?” So I just started putting pen to paper, reading more and deconstructing what I read, trying to learn how to write. Which I’m still doing!

What’s next for you?
I’m working on a sequel of sorts to my second novel, The Wednesday Sisters. It follows three of the daughters of the Wednesday Sisters as they take one of the sister’s ashes to the England Lake District—home of Beatrix Potter—to scatter them. 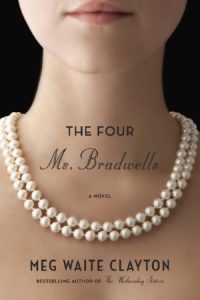