The Race for Paris

This most ambitious novel yet by bestselling author Meg Waite Clayton was inspired by the actual “Race for Paris” and the extraordinary women who were some of the first journalists to report from the liberated city in August 1944. For the readers of historical fiction with strong female characters such as The Paris Wife and Nancy Horan’s Loving Frank, the story itself is reminiscent of the classic World War Two era film Julia.

In Clayton’s fifth novel Jane Tyler, a journalist, and her friend Liv Harper, a photographer, travel deep into the war zone with British military photographer, Fletcher Roebuck, as they join the crush of male reporters speeding toward the City of Light. Desperate to get battle stories and photos published, they ultimately decide to report instead on the tragic impact of the war on the soldiers and the civilians in its path.

As a love triangle develops among the three, they drive each other to take greater risks and eventually follow the Allied troops to Valkenburg, where the citizens have been living for months in a cave for safety. Their fearlessness puts their lives in danger and tests them in ways they never expected in this profoundly moving novel that explores the obstacles women journalists faced in covering the war, as well as issues of motherhood, friendship, and love.

“This marvelous novel has everything—adventure, romance, history, and most of all heart. Every reader who enters this “Race” will come out a winner.”
— Ann Packer, author, New York Times Bestselling author of The Children’s Crusade

“Meg Waite Clayton is at the top of her game with this ambitious, riveting novel. Set in France in 1944, The Race for Paris brings to life the yearnings, ideals and aspirations of a female reporter and a photographer who risk their lives to document the final months of the Nazi occupation. ‘You don’t find courage, it finds you,’ one character remarks. As they make their way toward Paris, the two women discover how true this is, in ways they could never have anticipated. Deftly weaving fact and fiction, Clayton captures the texture and cadence of daily life in a world that is anything but ordinary.”
— Christina Baker Kline, author #1 New York Times bestselling of Orphan Train

Meg Waite Clayton gives us what we want from historic fiction. She introduces us to a world we never knew existed and then makes it utterly compelling. I loved the story of these brave women, the risks they took, the ambitions that fed them. Moving and gripping, it is a thriller of women and war. And thanks to her “Anonymous” just got a little less anonymous.
— Mary Morris author of The Jazz Palace and The River Queen

“A smart, engrossing, and ultimately heartbreaking story of two women journalists and the British military photographer who travels with them from Normandy to Paris in the summer of 1944… Clayton gives us a story of friendship, love, and sacrifice that no one who has the pleasure of reading it will soon forget. I loved this book.”
— Sara Gruen, #1 New York Times bestselling author of Water for Elephants and At the Water’s Edge 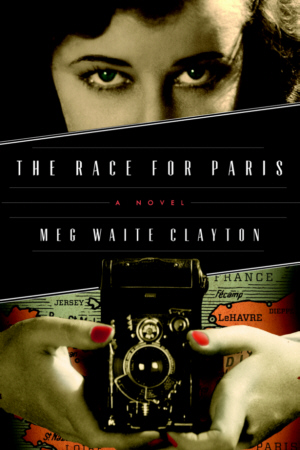