In STALKING THE DIVINE, a Cleveland woman attends Christmas Mass at an old city church seeking holiday cheer and comfort in the trappings of a faith she abandoned more than 30 years ago. Instead, she finds a tiny threadbare congregation and a nearly forgotten group of aging, cloistered, contemplative nuns with a mission to pray day and night for the sorrows of the world. Thus begins a three-year dialogue between the nuns and Kristin Ohlson, who struggles to understand how these women gave up the world–and continue to do so joyfully–for their faith. Ultimately, Ohlson finds that talking to the nuns becomes a way of opening herself up to the possibility of the sacred–which is, in its way, an answered prayer.

“One of those beautiful rare books that churns in a reader’s heart long after you put it down, STALKING THE DIVINE elegantly and honestly articulates the ache for faith in our world, in the solitude of the modern self–faith in anything, anyone, if not God–and Kristin Ohlson’s lucid prose and deft reportage have persuaded me that this quest alone is the fundamental act of grace available to humanity. Indeed, the journey defines our humanity, shapes it, expands it, haunts it.”
— Bob Shacochis, author of the “Immaculate Invasion”

“Kristin Ohlson is a scrupulous observer and a wonderfully intent writer. She brings us right up against the mysterious silence of the Poor Clares and gets us to feel the pressure of their devotion. A fascinating book.”
— Sven Birkerts, author of “The Gutenberg Elegies” and “My Sky Blue Trades”

Kristin Ohlson’s STALKING THE DIVINE offers us a fascinating look into a place few ever see: the private, cloistered world of the Poor Clares of Cleveland, Ohio, who pray for the world twenty-four hours a day. We learn how they spend their days in constant communication with God, how they found their faith, and how they keep it. But it is not a story just about the Poor Clares, but the questions Ms. Ohlson asks of herself: What is faith? How do you know when you have it? Ms. Ohlson does a wonderful job of weaving her own personal journey into the story of the Poor Clares. It’s a book worth reading for anyone who has ever had religion, lost religion, or needed it. Which is just about everyone.
— Sarah Willis, author of “Some Things That Stay” and “The Rehearsal”

Kristin Ohlson’s honesty, intelligence, and charm make this book irresistible. A nonbeliever who longs for a convincing spiritual experience, she writes about a community of cloistered nuns: women as honest, intelligent, and charming as she, who have centered their lives around prayer. STALKING THE DIVINE is a delightful story about curiosity, by a writer who can’t be dispassionate about her subject and also can’t lie to herself.
— Alice Mattison, author of “The Book Borrower” and “Hilda And Pearl” 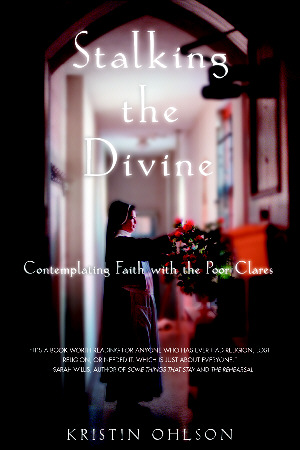