1. Kristin Ohlson discovers the Poor Clares of Perpetual Adoration’s church on Christmas Day, a day she says is “always ribboned with loneliness and impossible yearning and melancholy.” Why was she drawn to the church on this particular day? Do you find yourself more drawn to faith on such days? To community?

2. Ohlson says that in the past, she considered faith “a kind of sickness, something that allowed the soothing delusion of divine power.” Have you ever felt this way about faith? Do you know anyone who does? Did you or they change—and if so, what was the impetus?

3. Ohlson says that when she first entered St. Paul Shrine—the Poor Clares’ church—that “nothing inside met my expectations.” Do you think it was this gap between expectation and experience that allowed her to open up to faith? Has this ever happened to you?

4. When Ohlson sees Father Senan walk through the church in his Franciscan robes after Mass, she was as delighted “as if I’d time-traveled into the Middle Ages and was face to face with Friar Tuck.” How much do you think the trappings of faith—the robes, the statues, the candles, the rituals, and so on—appealed to Ohlson? How do they affect your own spiritual life?

5. In her letter asking the Poor Clares if they’d let her write about them, Ohlson tells them that her interest is, in part, personal: that she has a wistfulness for faith and wants to learn about it from those who never left it behind in the first place. Do you agree with her that there are many people who have this same wistfulness for faith? Why do you think some people remain believers all their lives and others fall away, at least for a while?

6. When one of Ohlson’s friends tells her that she’s “so good” for going to Mass every Sunday, Ohlson says that she actually wants to go—that somehow, “the act of going had created the desire to go.” How have spiritual observances developed into habits for you? Do you think these habits are more meaningful when they are freely chosen, as in Ohlson’s case, or when they’re dictated by a church, synagogue or mosque? What do you think helps people incorporate faith into their daily lives?

8. While she was writing the book, Ohlson says that she encountered many misunderstandings about the life of a cloistered, contemplative nun. What do you think would be the hardest thing about this kind of life? What would be the best part? Did your view change after you read Stalking the Divine?

9. One of the Poor Clares tells Ohlson that for her, faith often means just going through the motions—meaning that she often doesn’t feel close to God, even though she has chosen this most-intense form of religious life. Do you think many people lead a life of faith without feeling close to God? What sustains their faith when they don’t have this feeling?

10. Ohlson writes that Clare of Assisi – the original Poor Clare—begged a series of popes for the gift of poverty. In our society, people rarely think of poverty as a gift! Do you think Clare’s ideals make much sense for this day and age?

11. At the end of the book, Mother James tells Ohlson that prayer helps maintain the balance between good and evil in the world. What do you think prayer does, if anything? How do you define it?

12. Ohlson clearly doesn’t agree with all the teachings of the Catholic Church, yet she seems to feel at home at St. Paul Shrine anyway. Do you think many believers have similar disagreements with some of the positions and beliefs of their church, synagogue or mosque, yet decide that that is where they belong? Can the spiritual core at the heart of their chosen faith somehow transcend those disagreements?

13. One of the nuns tells Ohlson that when she was young, she used to try so hard to be good but then realized that, “God didn’t need my goodness—he wanted my love.” If you’re a believer, what do you think God wants of you?

14. Ohlson often uses humor as she discusses her struggle to understand faith. Do you think this is a mark of her continuing discomfort with faith, or is it part of an effort to make faith less daunting?
15. If Ohlson had not stumbled upon the Poor Clares, do you think she would have eventually found faith anyway? Is coming to faith a matter of fate for certain people, or is there a large element of chance involved? Or does it only seem like chance? Was she stalking the divine, or was the divine stalking her?

16. Or—do you wonder if Ohlson did, in fact, find faith? Where do you think she tells you that she did—or not? Does the book have the kind of climax—the satisfying aha!—that you expected? Or is this not the kind of thing that you expect from a memoir?
17. What do you find most appealing about Ohlson’s voice as a writer? Which aspects of her character do you most and least identify with?

Kristin Ohlson is a freelance writer who has published nonfiction articles and essays in the New York Times, Ms, Salon, Discover, New Scientist, Food & Wine, Tin House, and many regional and alumni publications. She has also published short fiction in Ascent, Indiana Review, Akros and other literary magazines. She received a BA in English from Cleveland State University and an MFA from Bennington College. Born and raised in Oroville, California, she now lives in Cleveland, just miles from the Poor Clares. 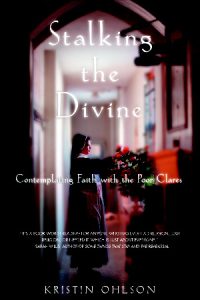